Pemex's Oil Find May Not Be a Silver Bullet 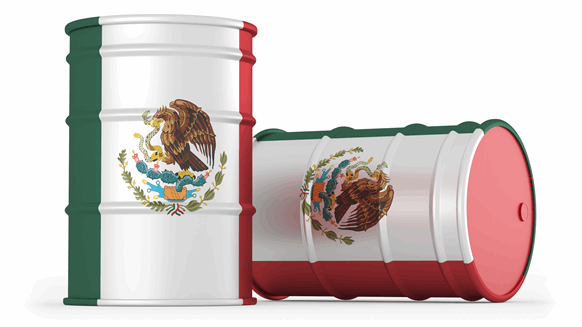 The discovery is a welcome development for the beleaguered driller that has experienced almost 15 years of output declines.

(Bloomberg) -- Even as Mexico’s president and Petroleos Mexicanos’s CEO touted the country’s most important find in three decades, it appears to be far from a panacea for the beleaguered state driller.

Pemex called the Quesqui deposit -- which is believed to contain 500 million barrels of proven, probable and possible, or 3P reserves -- the most important discovery since 1987. Another onshore field Ixachi discovered during the previous administration was touted as the largest find in 25 years, with some 1.3 billion barrels of 3P reserves.

The discovery -- of very light oil, or condensate, and natural gas -- is a welcome development for the beleaguered state driller that has experienced almost 15 years of output declines and has about $100 billion in debt, the highest of any oil company. But one analyst cautioned against over-optimism at this point.

“Productivity-wise, it seems to be smaller than Ixachi,” said Pablo Medina, vice president of Welligence Energy Analytics, an energy consultant. “There hasn’t been a development plan submitted for it, so it’s too early to talk about reserves based off one single well.”

The field is expected to reach 69,000 barrels a day of oil production and 300 million cubic feet of gas production next year, Pemex said in a statement on Friday. Pemex is drilling another delineation well and the volume could increase by as much as 200 million barrels, Pemex’s Chief Executive Officer Octavio Romero Oropeza said in a press conference with President Andres Manuel Lopez Obrador on Monday.

Pemex has been struggling to turn around production declines and revamp its refineries to make the country more self-sufficient, a major goal of the administration. The company said that oil output will reach 1.778 million barrels a day by the end of December, up from 1.712 million at the start of the month -- but still down by half since 2004. In June, Fitch Ratings Inc. cut Pemex’s bond rating to junk, and the company could face a fresh downgrade by another credit agency.

The find could help Pemex’s credit rating by boosting reserves, according to Romero. Mexico will incorporate an additional 500 million barrels of proven reserves next year, bringing the total to 7.5 billion barrels, he said.

“When a field has 500 million barrels of reserves, it’s considered a giant field,” Romero said during the conference. “Of course, for the ratings agencies this is good news regarding Pemex.”

Lopez Obrador lauded the discovery in his home state and criticized the previous administration’s strategy to invest in the deep-water Gulf of Mexico as expensive. “Today, where are we investing? Where there’s oil,” he said during the conference.

Lopez Obrador has scaled back the 2014 energy reforms designed to lure in private investment, promising to “rescue” Pemex by investing in onshore and shallow water fields instead of more technically complicated deep-water areas.

“It is great news for Pemex to continue having discoveries,” said Medina. “However, blowing them out of proportion is something we’ve seen happen in every government administration.”