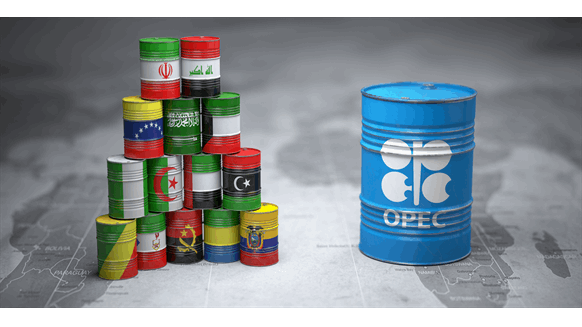 Hours after a historic call, prospects for a rapprochement between two historically antagonistic crude powers have started to unravel.

(Bloomberg) -- Just hours after one of the most powerful officials in the biggest U.S. oil state was invited to OPEC’s inner sanctum in June, prospects for a rapprochement between two historically antagonistic crude powers began to unravel.

Texas Railroad Commissioner Ryan Sitton said Friday he was invited by OPEC Secretary General Mohammad Barkindo to attend the group’s summer meeting in Vienna. But even as the surprise announcement reverberated across U.S. and international petroleum circles, Sitton’s proposal to curb Texas crude output for the first time since the 1970s was criticized by fellow regulators.

“While I am open to any and all ideas to protect the Texas Miracle, as a free-market conservative I have a number of reservations about this approach,” Wayne Christian, chairman of the Texas commission that oversees the oil industry, said in a statement. If Texas cuts supply, “there is no guarantee other nations, or even states will follow suit.”

Sitton, an entrepreneur and Republican Party activist virtually unknown outside the Lone Star state, proposed Texas would curb oil output by 10% in exchange for an equivalent gesture by the cartel that controls more than one-third of global production.

The third commissioner, Christi Craddick, also expressed doubts about capping production, according to a person with direct of knowledge of the situation

Sitton’s outreach came at the end of a brutal two-week stretch in which international crude lost almost half its value, triggering layoffs, cash crunches and the steepest dive in Permian Basin oil drilling in more than three years. The demand-sapping spread of coronavirus was compounded with the unraveling of the Saudi-Russia supply compact on March 6.

“We all agree an international deal must get done to ensure economic stability as we recover from Covid-19,” Sitton said in a tweet after his conversation with Barkindo.

Although Sitton’s proposal appears to face an uphill battle, the potential consequences of an OPEC-Texas agreement would be hard to overstate. The cartel’s primacy over world crude markets is unrivaled; Texas pumps more than 40% of U.S. oil and as a standalone entity gushes more than every member of the cartel except mighty Saudi Arabia.

Such a tie-up would also confront Russian President Vladimir Putin with a formidable and heretofore unimaginable foe in using petroleum as a geopolitical weapon.

As it stands, the Organization of Petroleum Exporting Countries and U.S. shale producers are caught in the middle of a price war between Saudi Arabia and Russia, which has helped to drive crude prices to an 18-year low.

U.S. Energy Secretary Dan Brouillette told Fox Business he’s aware of the Texas proposal, but he said his agency isn’t “not part of that conversation.”

“There are state laws that are available to Governors, state regulators if you will, to manage production within the states,” he said.

Sitton wrote in a Bloomberg Opinion piece on Friday that the federal government could coordinate output cuts with Saudi Arabia and Russia to calm the market.

Riyadh and Moscow have been locked in a bare-knuckle fight for market share for three weeks after they failed to agree on a response to the oil-demand crash, and dissolved a partnership that had coordinated oil supplies for three years.

In addition to his philosophical objections, Christian cited the state agency’s lack of experience in throttling back output by thousands of independent companies. “Our IT capabilities to handle this process are limited at best,” he said.

It wouldn’t be the first time Sitton has split with his fellow commissioners. Last year, Craddick nominated Christian to serve as chairman, even though tradition dictated that Sitton would lead the agency as he ended his six-year term.

In a shocking upset earlier this month, Sitton lost the Republican primary election to Jim Wright, a rancher and chief executive of an oilfield-service company. Two Dallas lawyers, Chrysta Castañeda and Roberto Alonzo, will compete in a May runoff for the Democratic nomination to challenge Wright. No Democrat has won election to the commission in more than 25 years.

OPEC officials have often said that U.S. shale drillers, the biggest contributors to the oil surplus that has emerged this decade, should help shoulder the burden of rebalancing the market. With depressed prices forcing a flurry of job cuts, they may now be willing to join in.

Permian oil explorer Parsley Energy Inc. said the industry needs a coordinated approach, and railroad commission caps on state oil output could be one part of the solution. “This is a uniquely catastrophic time for the industry, and as such we need to think outside of our normal course of action,” Chief Executive Officer Matt Gallagher said Friday in an email.

“It seems totally irrational that the solution to the disruptive behavior of Saudi Arabia and Russia would be to imitate OPEC,” Macchiarola said in a phone interview.

To contact the editors responsible for this story:
Simon Casey at scasey4@bloomberg.net;
James Herron at jherron9@bloomberg.net
Joe Carroll, Carlos Caminada

Albert C.J.M. DUJARDIN  |  March 23, 2020
The US Energy Secretary should use his brains and take the lead in organising this deal on Federal level. The initiatives developed by various people are very valid and can with some specifics end a global economic disaster. This will be valid points for Trump??? Get your act together and do the positive action. For decennia the USA profited from OPEC when the price had to raise or be lowered. Join forces and lead the world away from a disaster, this WAR is between OPEC and the USA, not between SAUDI and Russia. The USA has developed the shale production and is self sufficient with even Export, this total production was before supplied by OPEC. This 12million bbls/d is the problem of the Oil Price. Get your act together USA and lead the world to the solution, this is your chance to score high, for yourself and the world.
Martha Brinnel  |  March 23, 2020
Hello, Respectfully, this is a little bit of sensational Journalism as the headline is a gross exxageration of the Content. Discussions are still ongoing between stake holders with views from both sides of the aisle as expected. A more representative headline is " Opec-Shale Peace Prospects faces uphill challenge" At a time like this, Journalists can play a major role in calming the markets, families and individual by being more circumspects about headlines and avoiding sensationalism at all cost. Thanks.
Kurt Anderson  |  March 23, 2020
There is a lot more in play than just TX oil production, so there should be many more people visiting "the inner sanctum" than TX producers. A few US defense officials declaring the US will no longer police the Hormuz or provide security for Saudi facilities unless fully compensated should be enough to end this bid.
Jeffrey B. Pickett  |  March 21, 2020
As the reality of long term low oil prices sink in, per breakeven cost of lateral fraced wells, under over priced mineral leases, with over valued production reserves and decline curves, the petroleum club's delusion of grandeur and West Texas helicopter money financed boom sinks into sunset where production will be down more than 10% by 2021.