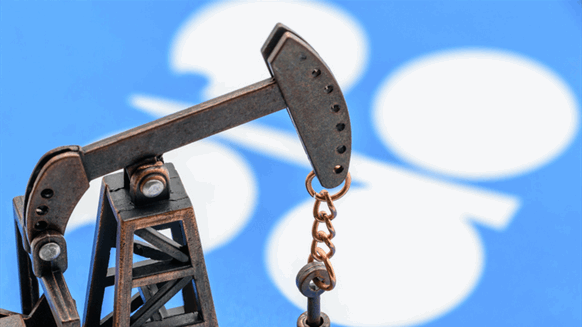 OPEC's first forecasts for 2020 showed it faces an even longer and tougher challenge.

(Bloomberg) -- A week after OPEC agreed to keep oil production restrained until early next year, the group’s first forecasts for 2020 showed it faces an even longer and tougher challenge.

The Organization of Petroleum Exporting Countries, which pumps 40% of the world’s oil, estimated that it’s producing about 560,000 barrels a day more than will be needed next year as the ongoing surge in U.S. shale threatens to deliver another surplus. Supplies from the cartel’s rivals will grow by more than twice as much as global oil demand, it forecast.

Saudi Arabia and its partners agreed in Vienna last week to continue the production cutbacks they’ve made into the first quarter of 2020, to balance markets against a faltering global economy and record American output. Crude prices, trading near $67 a barrel in London, remain below the levels most OPEC nations need to cover government spending.

The report released by the group’s research department on Thursday however suggests that it would need to cut production further, and continue that restraint for all of next year, in order to prevent the emergence of a new glut.

Global oil consumption will continue to grow in 2020 at the same pace as this year, at about 1.1 million barrels a day, or 1.1%. The expansion will be powered by emerging economies like India and China, but tempered by stagnant consumption in developed nations.

Supplies from outside OPEC however will soar by 2.4 million barrels a day, as new pipelines in the U.S. enable the country’s shale-oil explorers to press on with more drilling. The fresh tide of American oil will be supplemented by other countries such as Brazil and Norway.

As new non-OPEC supplies swamp the growth in demand, the amount of crude required from the cartel will slump sharply for a third consecutive year.

An average of 29.27 million barrels of crude will be needed from OPEC in 2020, significantly below the 29.83 million a day its 14 members produced last month. Their output fell again in June, as deliberate cutbacks were compounded by U.S. sanctions on crude exports from Iran.

With OPEC pumping in excess of levels needed next year, the organization and its partners would have to trim output further to keep markets in equilibrium, though Saudi Arabian Energy Minister Khalid Al-Falih said in Vienna last week that the kingdom -- which has reduced supplies more than it pledged -- has already cut “deep enough.”

Indeed, the report released Thursday may vindicate warnings from Al-Falih’s predecessor, Ali Al-Naimi, that production cuts by OPEC would only back-fire by giving prices enough support to encourage greater investment in U.S. shale.

For now, however, there’s no sign the kingdom intends to reverse its current policy. At last week’s meeting, OPEC and its partners signed a charter symbolizing their willingness to manage supplies over the long term, and Al-Falih said that intervention will be necessary until American shale output goes into decline.

The organization’s latest outlook suggests he will be tested on that commitment.

To contact the editors responsible for this story:
James Herron at jherron9@bloomberg.net
Helen Robertson, Rakteem Katakey

Paul Pickering  |  July 13, 2019
OPEC needs to remember that it only account for forty percent of oil and it also needs to remember that if it got its own house in order and stopped blackmailing the world and profiteering then the world wouldn't be searching for other supplies and suppliers. This is down to OPEC and OPEC alone. And of supplies from OPEC country's were more stable as in the country's themselves and didn't stir up trouble for everyone then everyone would win.