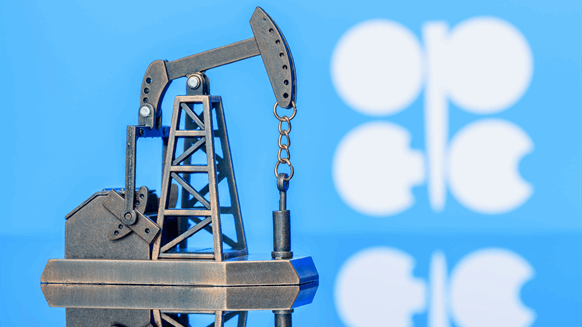 Due to a weaker economic backdrop and China’s strict anti-Covid measures, the Organization of Petroleum Exporting Countries lowered estimates for the amount of crude it will need to pump this quarter by 520,000 barrels a day, following a similar-sized downgrade a month ago.

This means the supply cut of 2 million barrels a day agreed by the group and its allies last month -- drawing fierce criticism from US President Joe Biden -- should bring output down to levels that balance markets, even if the reductions are not fully implemented, the report indicated.

“The significant uncertainty regarding the global economy, accompanied by fears of a global recession, contribute to the downside risk for lowering global oil demand growth,” OPEC’s Vienna-based research department said in its monthly report. China’s Covid-zero policy “adds to this uncertainty.”

Biden slammed Saudi Arabia and its partners after they announced the cuts last month, accusing Riyadh of endangering the global economy and abetting fellow OPEC+ member Russia in its invasion of Ukraine by keeping oil prices high.

Market trends since then have given OPEC’s decision some vindication, with prices remaining broadly steady near $95 a barrel even as demand signals gyrate. While China -- the world’s biggest oil importer -- has amended some restrictions aimed at eliminating Covid outbreaks, the government says these are a refinement and not relaxation of its policy.

World markets have been in surplus for much of this year, with the daily supply excess ballooning to 1.1 million barrels last quarter. The average overhang for the year will be 300,000 barrels a day, according to the report.

OPEC expects that it will need to pump an average of 28.92 million barrels a day of crude to satisfy demand during the fourth quarter, it said.

While that’s roughly 574,000 barrels a day less than its 13 members produced in October, the surplus should be whittled away -- and possibly turned into a deficit -- as the organization and its allies implement their cuts.

Only part of the agreed supply reduction is expected to be implemented, with Middle East heavyweights Saudi Arabia and the United Arab Emirates shouldering the biggest burden. Other members have little obligation to cut because they are already producing below their output quotas due to years of under-investment or political instability.

The report indicated that demand will rebound seasonally in the first quarter of next year, reviving the need for OPEC’s crude. The full 23-nation OPEC+ alliance will meet to consider production policy for early 2023 on Dec. 4 in Vienna.