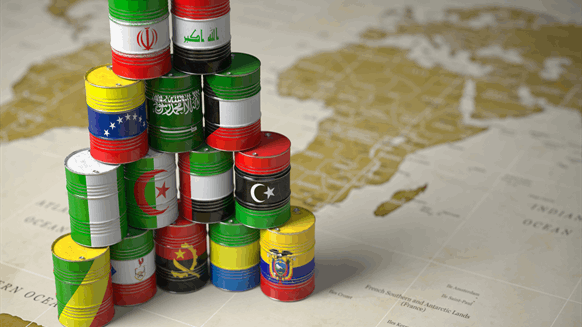 Plans for an emergency gathering have faded away.

(Bloomberg) -- OPEC sent out invitations for meetings between the cartel and its allies on March 5 and 6, delegates said, signaling that plans for an emergency gathering have faded away.

The 23-nation coalition known as OPEC+ had already scheduled the conference for early March when it last assembled in December. Saudi Arabia has been pushing for weeks for an earlier meeting of the Organization of Exporting Countries and its allies with Energy Minister Abdulaziz bin Salman this week equating the coronavirus’s impact on the market to a house on fire.

Russia -- the most important ally in the broader alliance -- has resisted the initiative, saying that more time is needed to assess the impact of the disease. The invitations distributed this week confirm that the gathering will take place on the originally scheduled dates.

It appeared earlier this month that the move for action was accelerating, as OPEC+ convened an urgent session of technical experts in Vienna, who recommended that the producers deepen current cutbacks by 600,000 barrels a day. The coalition is already implementing just over 2 million barrels a day of output curbs to shore up prices in the face of soaring U.S. shale-oil supplies.

However, the proposal to cut deeper hasn’t yet received backing from Russia, which is able to weather low oil prices more easily than Persian Gulf producers. Oil traders will now have to wait until early March to see whether the alliance goes ahead with any new measures.

To contact the editors responsible for this story:
James Herron at jherron9@bloomberg.net
Christopher Sell, Rakteem Katakey