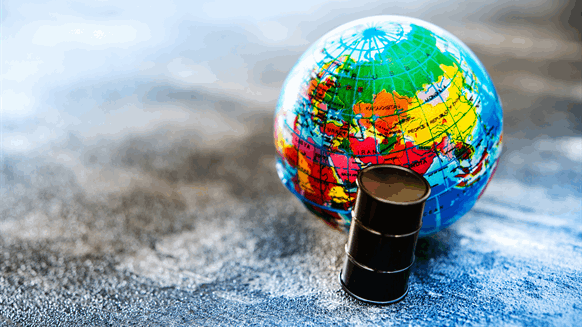 OPEC reached an agreement that adjusts its official production targets, but removes few barrels from a market that's forecast to return to surplus early next year.

(Bloomberg) -- OPEC reached an agreement that adjusts its official production targets, but removes few barrels from a market that’s forecast to return to surplus early next year.

After a day of debate in Vienna, ministers agreed to deepen their output-cuts target by 500,000 barrels a day, a delegate said, formalizing the extra supply reductions the group has already been making for most of this year.

Crucial details have yet to emerge from the ministerial meeting of the Organization of Petroleum Exporting Countries in Vienna on Thursday, and its decisions must also be ratified by the wider group known as OPEC+ on Friday. Delegates said there was no agreement yet on how the cuts will be divided between members, and more importantly the production level of Saudi Arabia, which has made by far the biggest contribution to the supply curbs.

Crucially, the new quota that applies in the first quarter of 2020 would come only into force if all members of OPEC+ implement 100% of their pledged curbs, Russian Energy Minister Alexander Novak said in a Bloomberg TV interview. That’s something the OPEC+ alliance has struggled to achieve throughout the three years of its existence, with some countries such as Iraq actually increasing output after promising to cut.

“We have to see if the cuts do translate into real cuts,” said Olivier Jakob, managing director of consultant Petromatrix GmbH. “It’s too early to be able to say what’s going to be the real impact on supplies. We really need to see the small print before making a call.”

Crude prices were whipsawed by events in the Austrian capital. Futures were 0.1% lower at $58.36 a barrel as of 12:37 p.m. in New York, erasing earlier gains.

OPEC+ agreed last year to reduce output by about 1.2 million barrels a day in order to eliminate a surplus and bolster crude prices. In reality, the alliance has cut far deeper for most of 2019 due to a combination of voluntary and involuntary measures. The group’s Joint Technical Committee concluded that supply reductions exceeded that target by about 40% in October, equivalent to about 500,000 barrels a day of additional curbs.

Saudi Arabia, wishing to lead by example, has pumped well below its quota for the duration of the agreement. Other nations including Angola, Azerbaijan and Mexico have simply been unable to sustain their production due to natural declines.

The deal expires at the end of March, right in the middle of what looks to be a tricky patch for the oil market. Demand growth is slowing and another big expansion in rival production is coming down the pipeline.

Together those factors could create another oversupply that drives international prices back down toward $50 a barrel. That’s too low for most OPEC members to balance their budgets, and would make an unfortunate epilogue for the record-breaking initial public offering of Saudi Arabia’s state oil company, Aramco.

The emphasis on compliance with the production cuts reflects Saudi Oil Minister Prince Abdulaziz bin Salman’s unhappiness with the status quo, in which countries including Iraq, Nigeria and Russia have consistently failed to implement their promises.

“The kingdom has explicitly communicated to OPEC that it will no longer tolerate under-compliance,” Amrita Sen, chief oil analyst at Energy Aspects Ltd., said before the committee meeting. “If it continues, Saudi Arabia can easily return to producing at or above its current quota.”

For Russia, which has achieved its targeted cuts in just three months this year, full compliance got easier on Thursday as OPEC agreed to exclude a very light oil called condensate from the country’s quota. Novak had argued that a recent increase in production of that hydrocarbon, which is extracted from natural gas, was the only reason Russia was falling short of its pledge.

Nigeria and Iraq have actually increased output, according to data from the International Energy Agency. Those two nations might be the only ones who have to adjust production as a results of Thursday’s deal, Roger Diwan, the veteran OPEC watcher at consultant IHS Markit Ltd., said from the sidelines of the meeting in Vienna.

“It’s a rollover for everyone but Iraq and Nigeria,” Diwan said.