Oil's Recent Plunge Signals No End in Sight for Meltdown 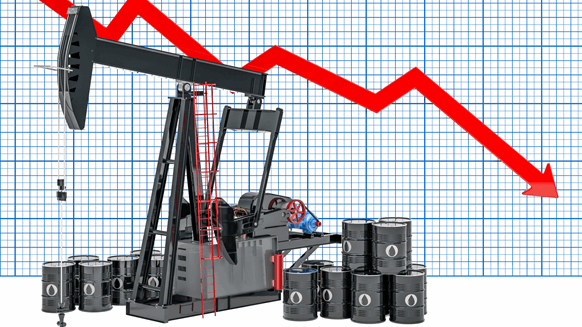 Oil is now down over 45 percent since failed talks between members of the OPEC+ alliance to further cut output.

(Bloomberg) -- Oil is ensnared in such as crisis that Wednesday’s 24% plunge in New York wasn’t even its worst day this month.

Futures are now at the lowest level in almost two decades after Saudi Arabia signaled it’s doubling down on a price war with Russia just as demand evaporates. Prices dropped below $25 a barrel for the first time since 2003 in London and tumbled 24% in New York as the kingdom vowed to keep producing at a record high “over the coming months.”

For the last 10 days, Riyadh has issued nearly daily statements raising the stakes in its shock-and-awe battle with Moscow, first announcing massive price discounts and output.

The kingdom is now pledging to pump flat out for months to come, and prices are in free fall. Oil is now down over 45% since failed talks between members of the OPEC+ alliance to further cut output and tackle the demand fallout from the virus outbreak.

“What we are seeing here is essentially the atomic bomb equivalent in the oil markets,” said Louise Dickson, an analyst at Rystad Energy A/S. “With each day there seems to be yet another trap door lying beneath oil prices, and we expect to see prices continue to roil until a cost equilibrium is reached and production is shut in.”

Riyadh appears to be heading to a Darwinian survival of the fittest for the energy industry, in which the highest cost producers, including U.S. shale companies and others working Brazil’s offshore fields, will suffer enormously. The Saudi Ministry of Energy “directed Saudi Aramco to continue to supply crude oil at a level of 12.3 million barrels a day over the coming months,” according to a statement.

Russia so far has suggested it’s prepared to absorb the pain, although for the first time on Wednesday the Kremlin said it would prefer higher prices. Yet, few in the oil market see either Moscow or Riyadh taking a u-turn.

Saudi Arabia “wants to keep the pressure high,” said UBS commodity analyst Giovanni Staunovo. “It seems to me they want to trigger so much pain to Russia and the other producers, to eventually have a new production deal at a later stage. That policy might create a lot damage in between.”

Oil is now cheaper than any time during the global financial crisis, when the world economy largely came to a halt for a few days. Demand is in free fall, with some traders saying it could drop by more than 10% compared with last year.

Brent futures declined 10% to settle at $24.88 a barrel, the lowest since 2003. Gasoline, diesel and jet-fuel wholesale prices also fell.

In the physical market, the pain is enormous. The Mexican oil basket, which measures the price the country secures selling its crude overseas, fell to $18.78 a barrel on Monday. In Canada, the benchmark crude price for tar-sands producers, known as Western Canadian Select, plunged to $7.47 a barrel.

“This is new territory,” said Brian Kessens, portfolio manager at Tortoise. “It’s clear Russia wanted to impair U.S. shale and E&P companies are really going to suffer. The more we see aggressive rhetoric from Saudi Arabia and Russia, the weaker crude oil is going to get.”

The market is finding little succor from global efforts to stem the economic fallout of the fast spreading coronavirus. The U.S. Federal Reserve on Tuesday announced the restart of a financial crisis-era program to stem the impact from the virus, but equities and bonds are continuing to drop.

The supply and demand shocks have hammered Wall Street’s outlook for oil. Goldman Sachs Group Inc. said consumption is down by 8 million barrels a day and cut its Brent forecast for the second quarter to $20 a barrel. Citi also lowered its bear-case forecast saying Brent could average $17 a barrel or lower in the second quarter, while Mizuho Securities warned prices could go negative as Russia and Saudi Arabia flood the market.

The rout amid ruthless competition between exporters has prompted Iraq to urge OPEC and its allies to regroup for negotiations. Before OPEC+ talks collapsed earlier this month, Iraq had routinely disregarded the supply cutbacks it had promised. Now the producer has asked the cartel to hold a meeting to consider steps for re-balancing the global oil market, according to a delegate.

“We just don’t know how far Russia and Saudi Arabia are willing to go,” said Rob Haworth, senior investment strategist at U.S. Bank Wealth Management in Seattle. “Until there’s some kind of agreement, it’s hard to figure out where the bottom is.”

To contact the editors responsible for this story:
David Marino at dmarino4@bloomberg.net
Pratish Narayanan, Carlos Caminada