Oil Up With Producers Edging Toward Deal 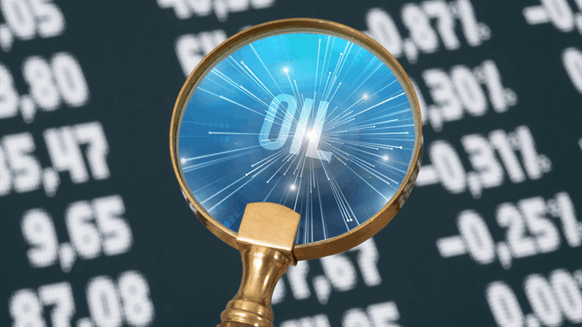 Oil extended gains as the world's top oil producers appeared to be moving closer to a deal to curb output.

(Bloomberg) -- Oil extended gains as the world’s top oil producers appeared to be moving closer to a deal to curb output in the face of deepening demand destruction being wrought by the coronavirus.

Futures in New York rose around 4% to above $26 a barrel after rallying Wednesday as Russia said it’s ready to cut by 1.6 million barrels a day, or about 15% of its total output. The OPEC+ meeting to be held later on Thursday will discuss a “massive output reduction, which may reach 10 million barrels a day,” the energy minister of Algeria, which holds OPEC’s rotating presidency, told his country’s state news agency.

G-20 energy ministers will then discuss broader contributions to any agreement on Friday, with U.S. cooperation likely key to unlocking the OPEC+ supply curbs. President Donald Trump has put huge diplomatic pressure on Russia and Saudi Arabia to reduce production, while saying America’s cut will happen “automatically” as plunging prices cause a pullback in output.

Moscow remains skeptical about the U.S. commitment, however, signaling that there’s still a chance negotiations will break down. Kremlin spokesman Dmitry Peskov said that Russia doesn’t consider a supply reduction driven by falling demand or lower prices to be a real output cut.

The possible end of the Saudi-Russian price war just over a month after it started is happening as global energy consumption plummeted faster than many anticipated. Oil demand in India, the world’s third-biggest consumer, has collapsed by as much as 70% amid the world’s largest national lockdown, while some of America’s biggest refineries are facing closure after U.S. oil consumption fell to the lowest in at least three decades.

The negotiations will be “a difficult conversation, despite Russian public undertakings to contribute,” said Michael McCarthy, chief market strategist at CMC Markets Asia Pacific. While the U.S. wants to avoid significant bankruptcies among shale producers, Moscow still wants to see those companies out of business, he said.

West Texas Intermediate for May delivery rose 4.2% to $26.14 a barrel on the New York Mercantile Exchange as of 7:30 a.m. in London after climbing 6.2% in the previous session. Brent for July delivery added 1.9% to $33.45 a barrel on the ICE Futures Europe exchange after closing up 3% on Wednesday.

Despite gains in the futures market, physical prices are still dropping as refineries cut processing rates and purchases. North American landlocked crudes are fetching ever lower prices, with grades in the Bakken region back beneath $10 and oil in Canada at a record low. Alberta Premier Jason Kenney warned on Tuesday that there’s a “very real possibility” of negative prices.

All but one of 26 analysts, traders and refiners surveyed by Bloomberg forecast that OPEC and other producers will agree to reduce output, with the average of their estimates at 8.5 million barrels a day. While that’s a vast decrease, it would still pale in comparison to the demand loss that some traders gauge is as much as 35 million barrels a day.

A coordinated output cut is now more likely than not, Goldman Sachs Group Inc. analysts led by Damien Courvalin said in a note dated April 8. However, a 10 million barrel a day reduction wouldn’t be sufficient and would still require an additional 4 million barrels a day of price-induced shut-ins, they said.