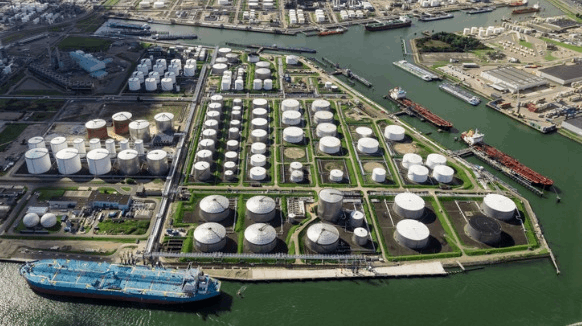 The key to the contango play is access to a place to park millions of barrels of crude, perhaps for as long as a year.

(Bloomberg) -- In March and April, as oil prices plunged to their lowest in a generation, Norwegian energy giant Equinor ASA was busy doing the opposite of what oil companies usually do: pumping as much crude as possible underground into giant caverns on the nation’s North Sea coast.

Equinor also filled oil tankers with crude, turning them into floating storage facilities, and put even more barrels into onshore tanks elsewhere. Its traders were trying to soften the blow of rock-bottom prices by buying cheap crude, storing it, and simultaneously selling it on the forward market at higher prices.

The trade, known in industry jargon as a contango play, combined with other oil trading activity delivered a record of about $1 billion in pre-tax adjusted earnings in a single quarter. And the Norwegian oil company wasn’t alone: it’s a pattern likely to be repeated throughout the industry from oil majors such as Royal Dutch Shell Plc to independent commodity trading houses like Glencore Plc.

The price difference between a Brent contract for immediate delivery and the six-month forward contract -- a key measure of the contango -- plunged to a record of nearly -$14 a barrel in early April, surpassing the contango witnessed during the 2008-09 financial crisis.

Equinor on Friday said that its midstream business line, which includes trading, made adjusted profit before taxes of $1.16 billion in the second quarter, an increase of $951 million from a year earlier. “The increase was mainly due to contango market during the quarter and good results from liquids trading,” the company said.

The key to the contango play is access to a place to park millions of barrels of crude, perhaps for as long as a year. And Equinor had plenty. “We have storage at Mongstad,” Eldar Saetre, the company’s boss, said in an interview, referring to the underground caverns able to hold almost 9.5 million barrels of crude under the country’s west coast.

“And we have storage capacity that we rent in Korea, we’ve done that for many years, and some other storages here and there,” he said. As onshore storage ran out, oil companies turned to tankers. “We have a lot of floating storage for this purpose,” Saetre added. “We have increased capacity for this purpose, increasing our shipping capacity for storage use.”

The three companies are expected to deliver strong oil trading results when they report their quarterly earnings over the next two weeks, according to people familiar with their business. Some of their so-called trading books made significantly more money in the first half of 2020 than they did in the entirety of 2019, the same people said, asking not to be named because the information isn’t public.

Shell in particular made huge amounts of money on its jet-fuel book, one person familiar with the matter said.

The trading units of Shell, BP and Total handle more than 25 million barrels a day of crude and refined products -- equal to a quarter of global consumption. The trio don’t disclose their trading results separately, and many investors consider the operations essentially black boxes. But in the past they have said that contango plays are extremely profitable, able to give a $500 million boost in a single quarter to their trading businesses.

Few other publicly-listed oil companies trade at the scale of the European oil majors and Equinor, although Eni SpA and Lukoil PJSC also have trading desks. While the extra profits from trading are unlikely to offset much larger losses of revenue from lower oil prices, they could help the three majors to weather the crisis and, perhaps more importantly, beat analysts’ estimates.

The independent traders also enjoyed a bumper period. Glencore, which earlier this year hired the world’s largest oil tanker to play the contango, made nearly $1 billion in earnings before interest and taxes in oil trading in the first six months of 2020, similar to what the company made in the whole of 2019, according to people familiar with the matter.