Oil Tanker Off Venezuela at Risk of Sinking 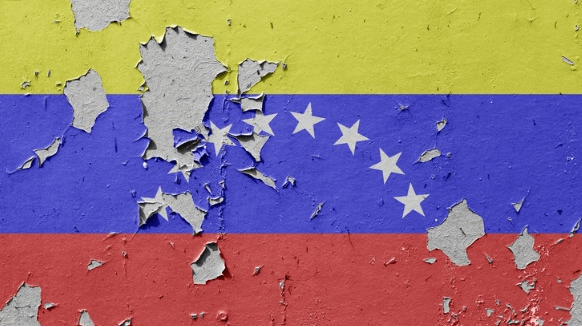 Venezuela reportedly is finding it difficult to secure a vessel on which to empty an oil tanker at risk of sinking off its coast because of U.S. sanctions.

(Bloomberg) -- Venezuela is finding it difficult to secure a vessel on which to empty an oil tanker at risk of sinking off its coast because of U.S. sanctions, a person familiar with the situation said.

The sanctions are scaring off foreign tankers from potentially taking the 1.1 million barrels of crude out of the Venezuela-flagged Nabarima floating storage unit, said the person, who asked not to be named because they weren’t authorized to comment publicly. Previous plans to unload the vessel over the past year have also been met with resistance from local workers because of the risks posed by the clashing currents of the Orinoco river and the Atlantic, according to another person.

The impasse is just the latest crisis facing Venezuela’s once mighty oil industry under the government of Nicolas Maduro. The country is struggling with constant fuel shortages, crumbling energy infrastructure and plunging production.

Nabarima used to load light crude from Petrosucre, a joint venture between Petroleos de Venezuela and Eni SpA that halted production last year. The venture produced as much as 38,200 barrels a day in 2012, according to PDVSA documents.

The vessel’s conditions is “stable” and recent “water leaks” were addressed, Eni said in a statement sent to Bloomberg. Eni is collaborating with Petrosucre to “define and implement a program for unloading the oil cargo from Nabarima,” which requires the use of a “dynamic positioning tanker” that must be given a green light under U.S. sanctions, the company said.

Eni can’t lift the crude from the vessel because under Venezuelan law only PDVSA can trade light grades.

Earlier this week, union leaders flagged the risk of a leak as Nabarima accumulated water over the oil tank line and machine room, while power generators and anti-fire systems were offline. If a spill should occur, it could reach international waters bordering Trinidad and Tobago, PDVSA workers said.