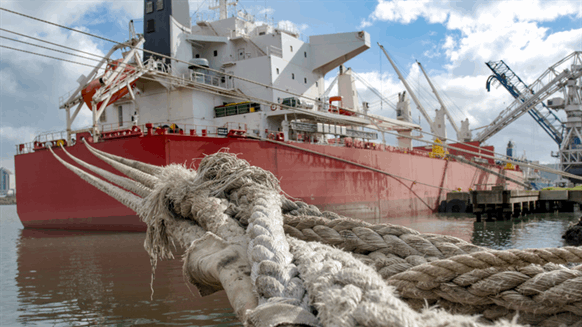 Oil companies are being forced to pay exorbitant prices for oil tankers as shipowners book vessels for storage and Saudi Arabia snaps up ships as it prepares to flood the market with crude.

(Bloomberg) -- Oil companies are being forced to pay exorbitant prices for oil tankers as shipowners book vessels for storage and Saudi Arabia snaps up ships as it prepares to flood the market with crude.

Reliance Industries Ltd. booked the supertanker Princess Mary for more than $400,000 a day to haul crude from the Middle East to the west coast of India in early April, according to vessel pool Tankers International.

The charter to India reflects which way rates are going, rather than absolute numbers that supertankers are earning. A voyage to Jamnagar, a key refining hub on India’s west coast, is about 1,300 miles, or 4-5 days’ sailing. Sometimes, in very strong markets, owners will insist on premiums for such routes, fearful of missing out on longer-distance bookings that guarantee high earnings for several weeks.

However, rates are also spiking on longer journeys. Earnings for supertankers on the benchmark voyage from the Middle East to China last week jumped by 700% to $243,347 a day, according to data from the Baltic Exchange.

As Saudi Arabia and Russia ramp-up production in a battle for market, more vessels are in demand for crude. At the same time, near-term oil prices have fallen so far below those in the futures that ships are being booked to store oil for months, when prices may be higher.

Saudi tanker company Bahri, which owns about 40 tankers, has booked an additional 25-to-30 giant carriers to load later in March or early next month, according to six shipbrokers and executives involved in the market.

“Fleet capacity utilization is now close to 100%,” Clarksons Platou analysts including Frode Morkedal said in a research note. “Although we are certainly at very high levels, the market could continue to go higher in the short term.”

To contact the reporter on this story:
Firat Kayakiran in London at fkayakiran@bloomberg.net