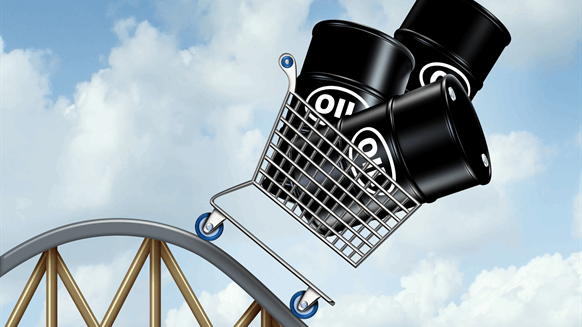 Oil fell below $50 a barrel to the lowest level in more than a year.

(Bloomberg) -- Oil fell below $50 a barrel to the lowest level in more than a year as prospects for an emergency meeting by OPEC+ withered, raising fears of a supply glut at the same time that the coronavirus is hitting global demand.

Futures tumbled 1.5% in New York on Monday. The Organization of Petroleum Exporting Countries is unlikely meet in February to discuss the impact of the conoravirus on oil markets, Azerbaijan’s energy minister told the RIA Novosti newswire -- leaving the possibility of further production cuts up in the air. Brent’s so-called red spread -- the difference between December contracts in consecutive years -- sank into bearish contango for the first time since August.

“This virus has been a shock to the system and the market is waiting to see what happens with OPEC+,” said Scott Bauer, CEO of Prosper Trading Academy in Chicago. “WTI is nearing the critical $48 support level. Brent spreads have dived from highs in January. It’s the perfect storm.”

OPEC and its allies have struggled to reach a consensus on how to respond to the outbreak in Asia that has sent oil prices plunging to one-year lows and crimped demand. A committee of technical experts proposed curbing production by an additional 600,000 barrels a day during the second quarter. Saudi Arabia has been the strongest advocate for the proposal with support from Iran and Bahrain. Russia, the biggest crude producer within the group, has not yet announced whether it will back the policy.

The structure of the futures market also revealed concerning signs of oversupply as the discount on prompt crude now extends all the way through to October contracts.

“We’ve seen a meltdown since the beginning of January,” said Muhammed Ghulam, senior associate at Raymond James. “Most if not all of the declines are driven by the coronavirus and spreads are indicating demand is very weak.”

West Texas Intermediate crude for March lost 75 cents to settle at $49.57 a barrel on the New York Mercantile Exchange.

Brent for April delivery fell $1.20 to settle at $53.27 a barrel on the London-based ICE Futures Europe exchange putting the premium over WTI at $3.49.

The coronvirus’s death toll has now exceeded that of SARS in 2002-2003. The outbreak has cut Chinese oil demand by 3.2 million barrels a day, industry consultant FGE said in a note. The country may need to cut crude imports by as much as 1.1 million barrels a day on average over the next four months, according to IHS Markit Ltd.

--With assistance from Saket Sundria and Elizabeth Low.

To contact the reporters on this story:
Jackie Davalos in New York at jdavalos10@bloomberg.net;
Grant Smith in London at gsmith52@bloomberg.net