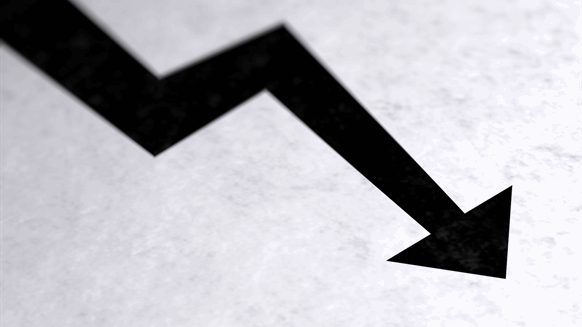 Oil headed for the biggest 2-day drop since July, with fuels from diesel to gasoline also declining as fears over a worsening trade war rattled markets across the board.

(Bloomberg) -- Oil headed for the biggest two-day drop since July, with fuels from diesel to gasoline also declining as fears over a worsening trade war rattled markets across the board.

Futures dropped as much as 1.9 percent in New York, after sliding 2.4 percent Wednesday. As trade tensions between the U.S. and China escalate, investors are shunning risk assets from equities to oil on fears over slowing growth. The S&P 500 Index slumped the most since February while the Nasdaq 100 Index had its worst day in seven years. Meanwhile, Hurricane Michael became the strongest storm to hit the U.S. mainland since 1992 as it made landfall in Florida, slashing fuel demand in the Southeast.

“It’s a typical spillover effect and oil’s been hit by the widespread sell-off in risk assets as the intensifying trade row stokes concerns over sluggish global demand,” Will Yun, a commodities analyst at Hyundai Futures Corp., said by phone. “If it were not for the trade dispute, the oil market probably would have kept its momentum on lingering supply risks.”

Crude had surged to a four-year high earlier this month with impending American sanctions against Iran set to curtail exports from the OPEC’s third-largest producer. U.S. President Donald Trump has repeatedly demanded the Organization of Petroleum Exporting Countries pump more to temper prices. While the rally has eased, traders continue to speculate whether the cartel and its allied producers can offset dwindling supplies from Iran to Venezuela.

West Texas Intermediate for November delivery declined as much as $1.37 to $71.80 a barrel on the New York Mercantile Exchange, and was at $72.37 at 7:55 a.m. in London. Prices are on course for the worst two-day slide since July 17 after closing at the lowest level since Sept. 27 on Wednesday. Total volume traded was about 77 percent above the 100-day average.

Brent for December settlement was 93 cents lower at $82.16 a barrel on the London-based ICE Futures Europe exchange, after falling $1.91 on Wednesday. The global benchmark crude traded at a $9.90 premium to WTI for the same month.

In equity markets, both the S&P 500 Index and the Dow Jones Industrial Average slipped more than 3 percent, while the Nasdaq 100 Index fell as much as 4.5 percent. The rout continued into Asian hours, with equity benchmarks from Japan to Hong Kong plunging.

In the U.S., Hurricane Michael has curtailed 40 percent of offshore crude output in the Gulf of Mexico this week, and is set to cause as much as $16 billion in damage. Gasoline futures dropped as much as 2 percent to $1.9808 a gallon, sliding for a third day. Demand for the motor fuel typically falls in the wake of a hurricane because roads become impassable and filling stations end up without power. Diesel slumped more than 1 percent.