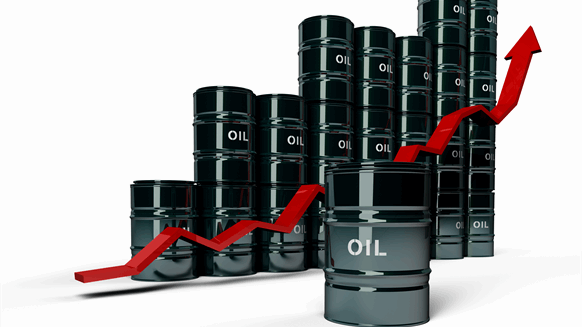 Oil prices rose, with US crude futures jumping more than 2%.

October Brent crude futures, the most actively traded contract, settled at $75.55 a barrel, up 79 cents. The September Brent contract, which expires on Tuesday, settled at $74.97, up 68 cents, or 0.9 percent. Volumes in an expiring contract tend to dwindle in the last few days before it goes off the board.

WTI rose on expectations that U.S. inventories fell last week and worries that an outage at a Syncrude facility in Canada will not be solved as soon as expected, traders said.

"We’re just getting tighter and tighter here in the U.S. in terms of supply, particularly in Cushing," said John Kilduff, partner at Again Capital Management in New York. "That's why you're seeing WTI rise."

Crude inventories at the Oklahoma, delivery point for WTI have been dwindling, in part due to the situation at the Syncrude facility that has reduced the flow of oil into the hub.

Stocks at the Cushing dropped to 23.7 million barrels, the lowest since November 2014 in the week to July 20.

Energy information company Genscape, however, said that inventories at the Cushing rose almost 200,000 barrels, or nearly 1 percent, from Tuesday to Friday last week, according to traders.

Oil prices have rebounded from recent lows over the last two weeks, as looming sanctions on Iran have already started to curtail exports from that country. U.S. President Donald Trump said on Monday he would meet with Iran's President, Hassan Rouhani.

"The best-case scenario is that the U.S. provides meaningful sanction waivers in the run-up to the mid-term elections and Iran can get away with a loss of around 500-700,000 barrels per day of exports," PVM Oil Associates Tamas Varga said in a note.

The market held gains even after a Reuters survey showed the Organization of the Petroleum Exporting Countries increased production in July.

Prices remain buoyed by a tight supply outlook, with global inventories down from record highs in 2017 and U.S. inventories at three-year lows, said Gene McGillian, vice president of market research at Tradition Energy in Stamford, Connecticut.

"If you take a step back and look at where global inventories and U.S. inventories are, you're seeing a tighter picture than where we were a year ago," McGillian said. "Overall, I think the market is in the process of stabilizing."