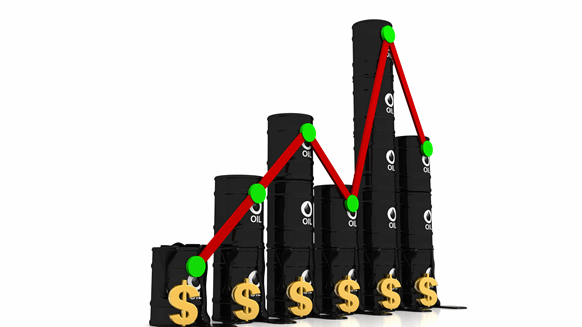 Crude rebounded from earlier losses after President Trump withdrew from the Iranian nuclear accord and said new sanctions will be imposed.

(Bloomberg) -- Crude rebounded from earlier losses after U.S. President Donald Trump withdrew from the Iranian nuclear accord and said new sanctions will be imposed on OPEC’s third-biggest oil producer.

Futures pared losses to 2.4 percent in New York on Tuesday after earlier dipping more than 4 percent. Trump characterized the 2015 accord intended to halt Iran’s quest for atomic weapons as a great “embarrassment.” Sanctions lifted as part of that deal will be re-imposed after 180 days, according to the U.S. Treasury.

“There is still an open question on how strict the actions will be,” said Michael Lynch, president of Strategic Energy & Economic Research in Winchester, Massachusetts. “It leaves him a lot of wiggle room.”

The U.S. benchmark crude surged above $70 a barrel to start the week as traders speculated on Trump’s next move against the Islamic Republic. The U.S. will be working with its allies to “find a real, comprehensive and lasting solution to the Iranian threat,” Secretary of State Mike Pompeo said in an emailed statement.

West Texas Intermediate oil for June delivery slid $1.67 to settle at $69.06 a barrel on the New York Mercantile Exchange. Total volume traded was about 70 percent above the 100-day average. A measure of oil market volatility climbed to the highest level in a week.

Brent for July settlement dropped $1.32 to end the session at $74.85 on the London-based ICE Futures Europe exchange.

Iran is committed to its own obligations and the U.S. is not, Iranian President Hassan Rouhani said.

French President Emmanuel Macron said on Twitter that “we will work collectively on a broader framework, covering nuclear activity, the post-2025 period, ballistic activity and stability in the Middle East, notably Syria, Yemen, and Iraq.”

Meanwhile, oil options traders are betting on a near-term price plunge. Volume on June WTI $65 puts jumped above 19,000, the most actively traded on Tuesday. The options expire on May 17.

In the U.S., crude inventories likely increased by 1 million barrels last week, according to the median estimate of analysts surveyed by Bloomberg ahead of the release of Energy Information Administration data on Wednesday. The industry-funded American Petroleum Institute will release its weekly tally of inventories later on Tuesday.

Gasoline futures fell 1.1 percent to settle at $2.1114 a gallon on Tuesday. The U.S. will cut its reliance on foreign oil to the lowest in more than 60 years as domestic crude output surges to record levels. China bought record volumes of crude last month as some refiners made purchases anticipating disruptions to transporting oil during an international summit next month.