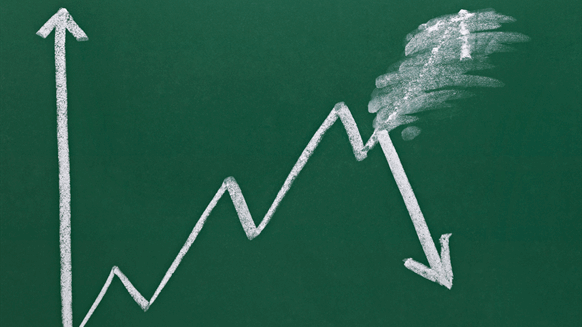 Brent crude futures fell 79 cents, or 1 percent, to settle at $78.51 a barrel. The global benchmark on Thursday broke through $80 a barrel for the first time since November 2014, and investors anticipate more gains due to supply concerns, at least in the short term.

Brent, which has gained about 17.5 percent since the start of the year, rose about 1.9 percent this week.

West Texas Intermediate (WTI) crude futures fell 21 cents to settle at $71.28 a barrel, a 0.29 percent loss. The contract rose about 0.9 percent for the week, its third straight week of gains.

"Nothing has changed fundamentally today to really drive that small price movement down," said Nick Holmes, an investment analyst on the energy portfolio team at Tortoise Capital in Leawood, Kansas, adding that some investors were taking profits ahead of the weekend.

Hedge funds and other money managers cut their combined futures and options position in New York and London in the week to May 15 to the lowest level in six months, the U.S. Commodity Futures Trading Commission said on Friday. The move was the fourth consecutive cut. The net long position dropped by 15,322 contracts to 419,907 during the period.

On Friday, traders were looking ahead to Venezuela's election on Sunday, which could then trigger additional U.S. sanctions if President Nicolas Maduro is re-elected for a six-year term, though the opposition party has largely boycotted the race and two of his most popular opponents have been banned from running.

The process has been criticized by the United States, the European Union and major Latin America countries.

Additional sanctions could further hurt Venezuelan oil supply, already reeling from lack of maintenance and state-run PDVSA's inability to pay its bills. Most recently, the company elected to close its refinery in Curacao after ConocoPhillips seized oil as it seeks to collect on a $2 billion court award.

Barclays said output from Venezuela could fall below 1 million barrels per day (bpd). The country produced around 1.4 million bpd in April, according to OPEC secondary sources.

OPEC leading producer Saudi Arabia said on Thursday it would make sure the world is adequately supplied with oil just as major consumer India expressed frustration with rising prices.

Crude prices have received broad support from voluntary supply cuts led by the Organization of the Petroleum Exporting Countries. Oil has also been buoyed by this month's announcement by the United States that it would withdraw from the 2015 Iran nuclear arms treaty and renew sanctions against the OPEC member.