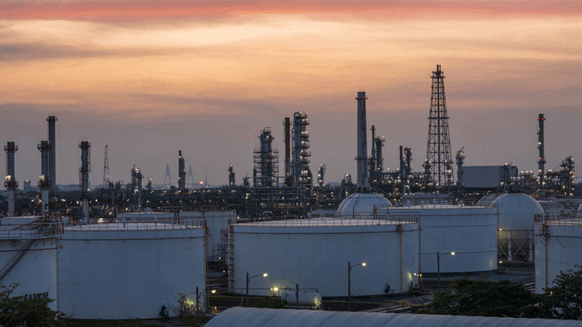 Futures in New York fell toward $37 a barrel after an Energy Information Administration report showed domestic crude stockpiles increased for the first time since mid-July. Inventories at the Cushing, Oklahoma, storage hub rose to the highest since May and crude production edged up.

Diminished gasoline and distillate inventories provided a bright spot, but signs that the pandemic-stricken global economy will take longer than anticipated to recover weighed on U.S. stocks and pressured oil prices.

The build in crude inventories is a “precursor that we’re not going to see the draws that people were expecting,” said Tariq Zahir, managing member of the global macro program at Tyche Capital Advisors LLC. “Demand globally is just not coming back the way people were hoping it was going to.”

The beginning of September has not been good to oil prices. U.S. benchmark futures have fallen about 13% since the end of August, as gasoline demand is seen stalling with the American summer driving season coming to an end. Globally, the outlook for crude consumption also looks grim, with S&P Global Platts forecasting oil demand to decline more than 8 million barrels a day this year and unlikely to get back to 2019 levels before 2022.

While U.S. gasoline stockpiles are gradually approaching normal levels for this time of year, it is mostly a result of low refinery runs rather than more Americans taking to the road. In fact, the four-week rolling average of gasoline supplied -- a gauge for demand -- fell for the first week since the end of July, according to EIA data. The onset of the refinery maintenance season is also clouding prospects for consumption already devastated by the pandemic.

“Gasoline inventories are now in the five-year high-low range, which is encouraging, but seasonally, demand is going to tick down over the next few weeks,” said Peter McNally, global head for industrials, materials and energy at Third Bridge. “You’re coming into a weaker period and the underlying fundamentals don’t look great.”

Brent’s six-month timespread was $2.88 a barrel in contango -- where prompt prices are cheaper than later-dated ones -- compared with $1.97 at the end of August. The change in the market structure indicates growing concern about a glut and may also, together with falling tanker rates, incentivize floating storage.

Still, there are some bright spots for the oil market. Since the start of the month, road traffic has grown in Europe and Asia. In China, the nation’s next five-year plan beginning in 2021 will call for increases to its mammoth state reserves of crude, strategic metals and farm goods, said officials with knowledge of the discussions, a potentially bullish driver for crude in the longer term. Meanwhile, some see the recent drop in oil prices stressing the need to tighten supplies.

“The fundamentals are not bad enough to send prices significantly below these levels, even in the relative near-term,” Bart Melek, head of global commodity strategy at TD Securities said in a note. With “a pragmatic OPEC+ supply philosophy and expected shale output moderation, after the recent price drop, a more moderate production trajectory should resume market rebalancing.”