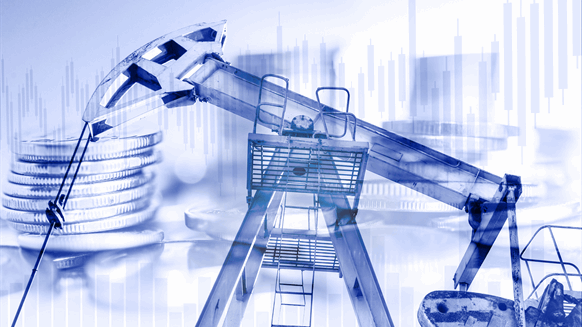 Oil extended its climb out of a month-long trading range.

(Bloomberg) -- Oil extended its climb out of a month-long trading range with further signs of an accelerating rebound taking shape in the U.S.

Futures in New York inched up alongside a broader market rally, wiht prices trading at a one-month high. U.S. jobless claims fell to a new pandemic-era low, while retail sales in the country accelerated by the most in 10 months -- providing the latest signs of the economic comeback gaining pace there.

“Prices are taking a little breather from the run-up we saw in the prior day,” said Phil Streible, chief market strategist at Blue Line Futures LLC in Chicago. “But overall, increasing vaccinations and easing fears over the pandemic are giving the market a “good shot at having a decent, steady rise.”

Oil remains firmly above its most recent trading range, where it had been stuck near $60 a barrel since mid-March as some regions faced a resurgence in virus cases. Continued signs of a stronger U.S. market are also pushing prices higher. In the last week, the number of miles driven on the country’s interstates rose versus the same period in 2019 for the first time since the pandemic began.

Still, even after U.S. crude stockpiles fell to the lowest since February, portions of West Texas Intermediate’s forward curve continue to point toward near-term weakness. The nearest contract still trades at a discount to the following month in a bearish pattern known as contango, which points toward oversupply.

“The demand outlook is brighter than it was, but there’s still plenty of spare capacity,” said Stewart Glickman, energy equity analyst at CFRA Research. “If demand picks up considerably, producers can open the spigots and start to fill in the gaps.”

Crude’s sharp rally has been accompanied by gains in the market’s structure that continued into Thursday. The much-watched spread between the nearest two December contracts is on track for its strongest close since late March. That’s a sign that traders are growing more bullish on the market.

There are reasons to be cautious, however. The pandemic is raging in countries such as India, which posted its largest one-day surge in new cases since the pandemic started. Another wild-card is Iran, which is seeking to revive a 2015 nuclear deal that could pave the way for a return of more of the country’s down the line, though progress remains uncertain. The demand picture in Europe is also wobbly, with toll road traffic in France last week the weakest since May.

The impact of the uneven global demand recovery is showing up in crude flows from Canada. Canadian oil sellers are sending exports to the U.S. West Coast for the second time this month as a swift vaccine rollout in the U.S. is boosting consumption there while others face a more muted recovery.