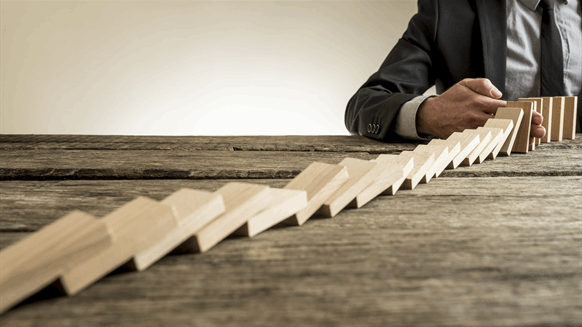 (Bloomberg) -- Oil pared a weekly loss as investor focus shifted from broader market turmoil spurred by a plunge in U.S. equities and returned to looming shortages from Iran’s dwindling exports.

Futures in New York rose as much as 1.3 percent. Prices headed for a 3.5 percent weekly drop, the most since July. While OPEC’s Secretary-General Mohammad Barkindo tried to reassure markets that supplies are sufficient, he neglected to specify how much extra output OPEC intends to pump, an omission that’s undermining efforts to calm prices. Meanwhile, the S&P 500 Index of equities is set for the worst week in more than six months, which had spurred some traders to shun risk assets.

Oil has retreated about 6 percent after reaching a four-year high earlier this month. Commodities were hit by the U.S. stock sell-off this week as risk aversion spread through global markets. Still, with impending U.S. sanctions on Iran set to cut the OPEC producer’s oil exports, traders continue to worry about whether the Organization of Petroleum Exporting Countries will be able to offset potential production losses.

“For oil, it’s important to look at the fundamental side because the recent decline is due to the risk-off sentiment across markets,” Min Byungkyu, a Seoul-based global market strategist at Yuanta Securities Co., said by phone. “Uncertainties still remain over output disruptions in Iran, and a supply shortage is looming in the market, so once the negative sentiment eases, oil will recover before equities.”

West Texas Intermediate for November delivery was at $71.72 a barrel on the New York Mercantile Exchange at 3:46 p.m. in Seoul, up 75 cents. The contract fell $2.20 to $70.97 on Thursday. Prices this week are set to fall the most since July. Total volume traded was about 17 percent above the 100-day average.

Brent for December settlement added 94 cents to $81.20 a barrel on the London-based ICE Futures Europe exchange. The contract declined $2.83 to $80.26 on Thursday. Prices are down 3.5 percent for the week. The global benchmark crude traded at a $9.59 premium to WTI for the same month.

As the biggest American stock sell-off in months soured sentiment across markets including raw materials, a measure of oil price volatility surged to the highest level since July during the session on Thursday. The Bloomberg Commodity Index had its first back-to-back drop in three weeks on Thursday as oil and aluminum prices plunged, and is on course for the first weekly drop in four weeks.

In the U.S., the Energy Information Administration reported nationwide inventories rose 5.99 million barrels last week, more than the 2.8 million increase predicted in a Bloomberg survey. Inventories at the key storage hub in Cushing, Oklahoma, have gained for a third straight week, while stockpiles in the Strategic Petroleum Reserve fell by 1.31 million barrels, the EIA said.