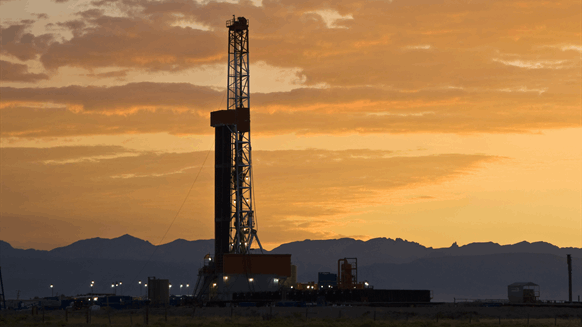 The comeback trail would be steep and long.

(Bloomberg) -- The American shale industry shocked the world with its rebound after the 2014-2016 bust, setting records for output that pushed the U.S. to the top spot among oil-producing countries. A handful of experts is saying that will happen again.

The comeback trail would be steep and long. The spread of coronavirus is crushing demand while Saudi Arabia and Russia are creating a glut. Everybody agrees U.S. production will take a bigger hit than last time, when it dipped before soaring. As many as 70% of the 6,000 shale drillers may go bankrupt, and one-third of shale-patch workers are expected to lose their jobs. Wall Street, which financed the last boom, has cut off the cash spigot.

Oil rigs stand in the Permian Basin area of Odessa, Texas, U.S., on Saturday, Jan. 19, 2019. In the Permian, America's busiest oil patch, a producer needs to blast as much as 60,000 barrels of water into a well every day, along with sand and chemicals, to complete the fracking that cracks open the tight, oil-bearing rock about a mile underground.

But some experts are saying the future, however far off, will be better. They’re looking past the dire forecasts and vertical chart lines and cautioning against despair. They’re echoing a widespread view that’s mostly unspoken during the market meltdown: Yes, America can shock the world again. The boom-and-bust cycle will shift, and shale is in a position, with its infrastructure, its ability to ramp-up quickly and its plentiful reserves, to rise from the ashes stronger than ever.

When the dust settles in the Permian Basin and other American shale fields, the survivors will be leaner and more tech savvy, according to Daniel Yergin, a Pulitzer Prize-winning oil historian and vice chairman of IHS Markit Ltd. That means lower production costs and a greater ability to respond to the next price rebound with the last thing Moscow and Riyadh want -- another boom.

“Companies go bankrupt, but rocks don’t go bankrupt,” Yergin said in an interview. “When this all shakes out, there will be other people to develop shale.”

Noah Barrett also believes the growth engine of U.S. crude production will be humbled, but won’t flicker out. That’s because shale has extensive infrastructure that isn’t going anywhere.

“The resource is still there, the pipeline capacity, the processing capacity,” said Barrett, a Denver-based energy analyst at Janus Henderson Investors. “Those are still there.”

Even if predictions are correct, that overall American oil output will slide to 8 million or 9 million barrels a day, down about one-third from the current 13 million, the U.S. would still count among the world’s very top producers, Barrett said.

Bloomberg Intelligence is forecasting a more-modest production falloff of about 1.5 million barrels a day.

The weakest companies “will go into stronger hands,” said Vincent G. Piazza, BI’s senior oil analyst. “The industry is going to be in a lot better shape than in 2014-2016. The balance sheet is in a lot better shape. I wouldn’t underestimate the ability of this industry to re-create itself.”

Fereidun Fesharaki is a shale believer, too. The chairman of global energy consultant FGE said he also expects the price squeeze to force explorers to become more efficient and cost-competitive.

Still, any rays of optimism must penetrate a very dense, dark cloud. In the market cataclysm that’s still unfolding, crude and fuel prices around the world have sunk to levels not seen in nearly two decades.

As if by evil magic, the Covid-19 outbreak has chased tens of millions of people from streets, stores, factories and travel hubs, suddenly degrading demand for gasoline, jet fuel and diesel across the world’s largest economies.

Veteran crude analyst Roger Diwan expects global consumption to plunge by more than 14 million barrels a day -- the biggest demand shock since the birth of the oil age. The pipeline that hauls 60% of the East Coast’s gasoline supply from the Gulf Coast is cutting capacity by one-fifth. In Chicago, wholesale gasoline tumbled to 15 cents a gallon, the lowest since at least 1992.

The virus-driven calamity has been compounded by the disintegration earlier this month of the Russia-Saudi cooperation pact that capped global crude supplies. Because of the rapidly expanding worldwide glut of crude, a barrel of oil in some parts of Texas recently fetched about $16. In Canada, oil traded for less than $10.

The price plunge instantly made thousands of prospective shale sites money-losing propositions. Companies have been in such a hurry to cut losses that some have paid early-termination penalties on rigs and other gear to halt work before contracts are up.

Even Chevron Corp. is retrenching. The California giant, widely recognized as holding some of the richest acreage in the Permian, said Tuesday it was slashing spending by $4 billion and halting share buybacks to conserve cash.

In the final three months of 2019, nine explorers and six service companies filed for bankruptcy, according to Haynes and Boone LLC. That represented $13.5 billion in debt. This year’s churn is just getting started. Mizuho Securities analyst Paul Sankey expects as many as 70% of the 6,000 or so shale drillers to go bankrupt before the cycle turns.

But private-equity firms that swooped in to buy ailing explorers and tempting assets during the last bust won’t be able to unfurl a safety net this time. The buy-and-flip model that underpinned their foray into shale has disappeared, forcing those firms to become oilfield operators, which in turn means tapping their own credit facilities, said Ian Rainbolt, vice president of finance at Warwick Energy Group, the biggest owner of non-operated U.S. shale assets.

Only about one-third of the Permian and other U.S. fields count as sweet spots that can harvest oil profitably at $30 a barrel, he said. West Texas Intermediate traded at $21.42 on Friday.

“Private equity’s going to be out of the game,” Rainbolt said. “It’s a very, very tough fund-raising market.”

In the meantime, service providers -- the hired hands of the oil industry who do everything from stack steel pipes to frack wells -- will experience extreme pressure, along with the explorers who are demanding price cuts, said Stacey Morris, director of research at Alerian, an indexing and research company. Pipeline owners are somewhat insulated because oil and natural gas still need to be shipped to refiners and export terminals, she said.

“The market is going to be out of balance for quite some time,” Morris said.

Yergin, the confidante of oil ministers and chief executives, sees the threshold for reinvigorating shale between $50 and $60 a barrel. U.S. crude was trading above the $50 level as recently as Feb. 26.

“At $50, we’ll start to see a recovery and a step up in investment, so long as people feel safe about the price floor beneath them,” he said.

It’s funny that Yergin should put it that way. A big part of shale’s resilience lies in its unique geology. Unlike the so-called conventional fields in Saudi Arabia and Russia, North American shale is rock so dense that it doesn’t degrade or collapse on itself if oil production is interrupted. In other parts of the world, disrupting output can do irreversible damage.

That’s why the bulk of Chevron’s $4 billion spending cut will take place in the Permian, CEO Mike Wirth said Tuesday. It’s a rare field where production can be turned off almost instantly without adverse long-term impacts.

With shale, “the assets don’t go away because you haven’t destroyed the field,” said Ken Medlock, senior director of Rice University’s Center for Energy Studies. “We’ll see a thinning of the herd but the assets will still be there.”

To contact the reporter on this story:
Joe Carroll in Houston at jcarroll8@bloomberg.net

To contact the editors responsible for this story:
Simon Casey at scasey4@bloomberg.net
Bob Ivry, Jessica Summers

WillDeBeast  |  March 30, 2020
Its my belief that when this is over (which is the question) there will be a lot of "pent up" demand. People are going to want to get out of their houses and move around. They are going want to get back to work. This applies worldwide not just the USA. This "pentup" demand will cause a resurgence.