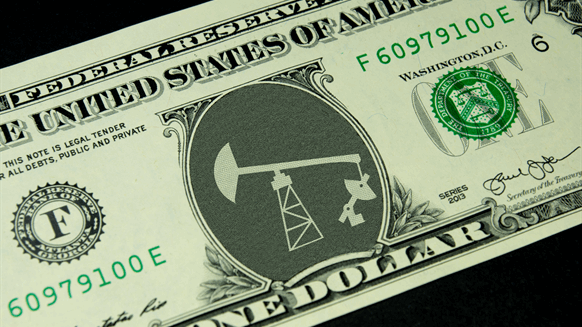 Oil fell the most since November.

(Bloomberg) -- Oil fell the most since November with a stronger dollar and concerns surrounding inflation weighing on crude’s best start to the year on record.

Futures in New York declined 3.2% on Friday, with a rising dollar reducing the appeal of commodities priced in the currency. Yet, the U.S. crude benchmark still managed to post a nearly 18% gain this month as inventories worldwide tighten and pockets of demand return. Domestic crude production dropped in 2020 for the first time in four years, according to the U.S. government.

“Prices have a little bit more risk to the downside from the recent run that we’ve seen,” said Tariq Zahir, managing member of the global macro program at Tyche Capital Advisors LLC. “To continue going higher from here, demand has to come back pretty substantially.”

Crude prices have notched the largest year-to-date gain than in any year prior for the same time period, in part due to OPEC+ production curbs helping to deplete global stockpiles. Plus, the unprecedented cold blast that recently halted millions of barrels of U.S. output means oil markets are about 100,000 barrels a day tighter than previously thought, according to JPMorgan Chase & Co. Supply scarcity may worsen in the coming months as North Sea fields undergo major maintenance.

The Organization of Petroleum Exporting Countries and its allies will meet next week to decide on output levels. While Russia has signaled it favors a further easing of production cuts, the country’s oil output dipped below its OPEC+ target this month, meaning it failed to take full advantage of the more generous quota it was afforded after January’s OPEC+ meeting.

“We all know the OPEC return to production is looming over the market pretty strongly,” said Gary Cunningham, director at Stamford, Connecticut-based Tradition Energy. Continued declines in global supplies will “depend on how much production OPEC brings back and whether or not the sanctions on Iran are lifted.”

Soaring bond yields on Thursday were the latest sign that accelerating inflation could trigger a pullback in monetary policy support that has helped fuel gains in risky assets during the pandemic. While global bonds have since stabilized, a less accommodative approach to monetary policy could have ripple effects across commodity markets.

“Crude oil was in super overbought territory,” and due for a pullback, said Bob Yawger, head of the futures division at Mizuho Securities. Plus, investors are “still anxious about rates ripping higher.”

--With assistance from Alex Longley and Sheela Tobben.