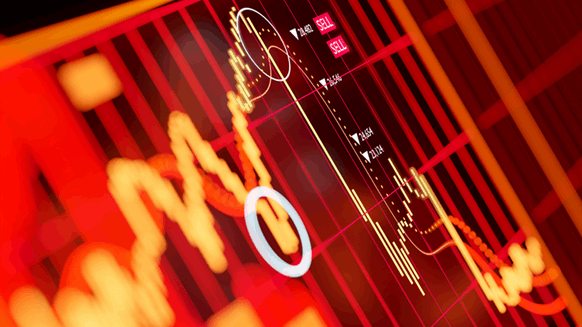 Crude extended its slide below $11 a barrel after the biggest oil exchange-traded fund unexpectedly began selling all its holdings of the most active contract amid rapidly dwindling storage capacity.

(Bloomberg) -- Crude extended its slide below $11 a barrel after the biggest oil exchange-traded fund unexpectedly began selling all its holdings of the most active contract amid rapidly dwindling storage capacity.

Futures fell about 17% in New York after losing a quarter of their value on Monday. The United States Oil Fund LP sold all of its West Texas Intermediate June contracts, significantly widening the spread between July WTI and raising concerns of a repeat of the collapse that sent oil below zero for the first time ever last week. U.S. producers have started making crude deliveries to the nation’s emergency stockpile as storage space runs out.

Oil has lost more than 80% this year as the coronavirus outbreak vaporized demand for everything from gasoline to crude despite global efforts to stem the spread. The world’s biggest producers have pledged to slash daily output from the start of next month to try and balance the market, but the collapse in consumption has led to a swelling glut that’s testing storage limits worldwide.

South Korea, which holds the fourth-biggest commercial storage capacity in Asia, was said to have run out of onshore space run by two big operators, while Singapore’s coastline has become even more congested with oil-laden tankers. In order to avoid the U.S. hub of Cushing from becoming more than 90% full in May and June, total production shut-ins would have to equate to 1 million barrels a day this month, according to JPMorgan Chase & Co.

“The startling June sell-off is in part due to the reality of storage facilities filling up rapidly,” said Stephen Innes, chief global market strategist at AxiCorp Ltd. “The pressure on global storage capacity for oil and oil products remains in focus.”

Brent for June settlement slipped 94 cents to $19.05 after declining 6.8% the previous day. Dated Brent, a reference for nearly two-thirds of the world’s physical oil flows, dropped to $13.62 on Monday, from $16.01 on Friday, according to traders monitoring prices from S&P Global Platts.

The U.S. Oil Fund is moving its money to contracts spread between July 2020 and June 2021 due to new limits imposed upon it by regulators and its broker. The ETF has changed its investment policy five times in the last two weeks.

U.S. producers have delivered 1.1 million barrels of crude into the Strategic Petroleum Reserve this month. On April 14, the Energy Department said it was negotiating leasing deals with nine companies, with most of the oil to be delivered in May and June, and possibly early April. It’s part of a plan by the Trump administration to help drain the nation’s growing glut of crude as commercial storage quickly fills up.