Oil Down on Virus Resurgence and Stockpile Build 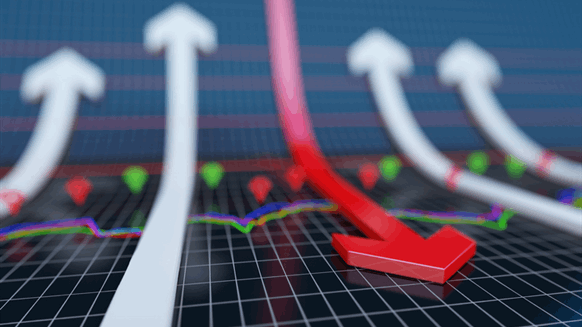 (Bloomberg) -- Oil edged lower after its biggest drop in almost two weeks as swelling U.S. crude stockpiles and a surge in coronavirus cases across the nation raised concerns about demand in the world’s largest economy.

Futures in New York dropped below $38 a barrel after losing 5.9% Wednesday as American crude inventories rose for a third straight week. New infections reached daily records in Florida, California and Texas, where the governor said a “massive outbreak” is sweeping the state. U.S. gasoline futures tumbled the most in two months amid fears that lockdowns may need to be re-imposed.

Activity at Indian refineries is still well down on year-earlier levels, more evidence that Asian nations aren’t managing to replicate China’s fast recovery. The pessimism has pushed global benchmark Brent’s prompt timespread back into contango. The market structure -- where near-dated contracts are cheaper than later-dated ones -- suggests there’s still concern about over-supply.

While the demand picture is still murky, the OPEC+ alliance’s production cuts and involuntary supply reductions from the U.S. shale patch have gone a long way to rebalance the oil market. However, that’s happened against the backdrop of a global economy that’s still struggling to shake off the coronavirus. The International Monetary Fund predicted on Wednesday a significantly deeper recession than it anticipated two months ago.

“We have seen an important reversal in the oil market” as optimism over the economic recovery fades due to the rise in virus cases, said Michael McCarthy, chief market strategist at CMC Markets Asia Pacific in Sydney. “We could see further downside to oil in the next few sessions.”

West Texas Intermediate for August delivery fell 0.7% to $37.73 a barrel on the New York Mercantile Exchange as of 7:30 a.m. in London. The U.S. benchmark is heading for just its second weekly loss since late April.

Brent for the same month dropped 0.8% to $39.99 a barrel on the ICE Futures Europe exchange after losing 5.4% Wednesday. The prompt timespread was 24 cents in contango, compared with 5 cents in backwardation at the end of last week.

Asia stocks fell Thursday after a tumble on Wall Street as the rise in virus cases prompted investors to reassess the prospects for the American economy. New York, New Jersey and Connecticut set quarantines for incoming travelers from hot zones in the U.S., while North Carolina froze its reopening for three weeks. The pandemic is now predicted to kill 180,000 Americans by October.

U.S. crude inventories rose by 1.4 million barrels to 540.7 million in the week through June 19, the Energy Information Administration reported. There was some positive news in the data, however, with gasoline stockpiles dropping by 1.7 million barrels and inventories at the storage hub at Cushing, Oklahoma falling by 991,000 barrels.