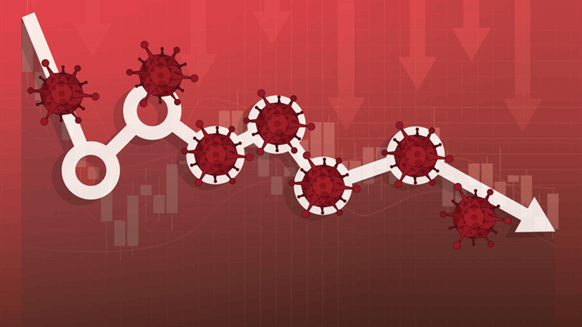 (Bloomberg) -- Oil kept falling after just its second weekly drop since April as coronavirus infections and fatalities surpassed grim milestones in a reminder the outbreak is far from under control in many parts of the world.

Futures in New York fell below $38 a barrel after losing 3.2% last week. Deaths from the pandemic topped half a million, cases rose past 10 million and a United Nations agency reported the most infections for a single day. A surge in cases across the southern and western U.S. is causing states including Texas to reinstate measures to halt its spread, threatening the outlook for oil demand.

Prices would likely be falling further if it wasn’t for efforts by the OPEC+ alliance to restrict production. Iraq -- a habitual laggard when it comes to supply cuts -- is reassessing contracts to pump crude at fields where costs are high as it tries to contain expenses while curbing production, in a sign of the commitment within the group to ease a global glut.

After rebounding rapidly from its plunge below zero in April on supply cuts and recovering demand, crude has fallen in two of the last three weeks. Oil stockpiles in the U.S. are at record highs, worldwide consumption is still a long way off pre-virus levels and many refiners are struggling with low margins. There’s also evidence American production is starting to come back, while Norway is pumping flat out from its new field.

“Oil may have reached its peak in the short run and prices are likely to consolidate over the next few weeks,” said Howie Lee, an economist at Oversea-Chinese Banking Corp. in Singapore. Prices have risen enough to encourage the return of marginal producers in the U.S., he said.

West Texas Intermediate for August delivery fell 1.9% to $37.75 a barrel on the New York Mercantile Exchange as of 7:36 a.m. in London following an 0.6% decline on Friday. Brent for August settlement lost 1.9% to $40.26 on the ICE Futures Europe exchange after dropping 2.8% last week.

The global benchmark crude’s six-month timespread was 93 cents in contango, where later-dated contracts are more expensive than near-dated ones, from 62 cents in contango Friday. The market structure indicates there is still some concern about over-supply.

In the U.S., Chesapeake Energy Corp, filed for bankruptcy on Sunday, becoming one of the biggest victims of a spectacular collapse in energy demand due to the virus. Exxon Mobil Corp., meanwhile, is preparing to cut jobs to create a slimmed-down, more efficient organizational structure.

In a move that has the potential to alter the balance of power between sellers and buyers in the oil market, China’s state-owned refining giants are in discussions to form a joint purchasing group to buy crude. The proposal has won the support of the central government and relevant industry watchdogs, said people familiar with the initiative, who asked not to be identified as discussions are private and ongoing.