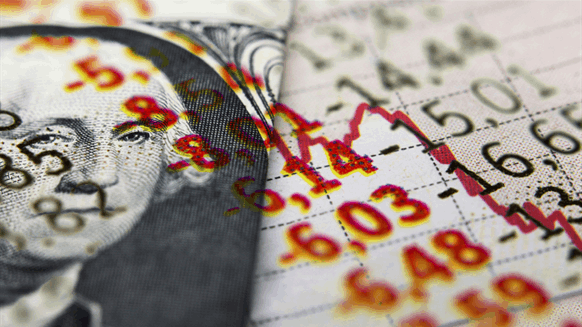 Oil's spectacular collapse deepened as widening global efforts to fight the spread of the coronavirus looked set to trigger the most severe contraction in annual oil demand in history.

(Bloomberg) -- Oil’s spectacular collapse deepened as widening global efforts to fight the spread of the coronavirus looked set to trigger the most severe contraction in annual oil demand in history.

Futures tumbled by more than 6% after losing a quarter of their value last week -- the largest drop since 2008. Even a massive emergency move by the U.S. Federal Reserve to cushion the world’s biggest economy just added to the fear gripping markets, with New York crude at one point dropping below $30 a barrel. Gasoline prices collapsed in the U.S.

The market is being pushed deeper into turmoil by unprecedented simultaneous demand and supply shocks. Forecasts for global oil use are being cut dramatically as government measures to contain the spread of the pandemic restrict the movement of people and throw supply chains into chaos. At the same time, giant producers are embarking on a destructive price war after the disintegration of the OPEC+ alliance that’s unleashing a flood of supply.

“Global financial markets are being rattled by the growing severity of the coronavirus and at the same time spooked by the enormity of the stimulus measures to combat it,” said Vandana Hari, founder of Vanda Insights in Singapore. “If the pandemic continues to worsen across the globe, oil will head lower. If it worsens in the U.S., belt up for an apocalypse.”

Travel restrictions across the globe tightened further over the weekend, with the U.S. extending its travel ban to include Britain and Ireland. Australia said anyone entering the country must self-isolate for two weeks, Spain imposed a lockdown and France closed cafes and restaurants.

New York City limited restaurants and bars to takeout and delivery service, and shut nightclubs, movie theaters and concert venues. The U.S. Centers for Disease Control and Prevention recommended postponing any events with more than 50 people for the next eight weeks.

The measures are going to hammer demand for gasoline. The motor fuel’s premium over crude fell to as little as $2.88 a barrel on the Nymex. It was $17 on March 6.

The Fed cut its benchmark rate by a full percentage point to near zero and will boost its bond holdings by at least $700 billion. The move could trigger a fresh round of monetary easing around the world as countries look to keep money flowing as economic activity grinds to a halt. New Zealand’s central bank slashed rates by 75 basis points on Monday.

The Fed’s extraordinary move to ease policy wasn’t enough to support markets, with stocks and bond yields all tumbling with crude. Gold prices and the yen rose along with Treasuries as investors sought a haven from the carnage.

Shares in energy producers were hammered. China’s Cnooc Ltd., which gets almost all its revenue from upstream oil and gas output and is Exxon Mobil Corp.’s partner at a major project on Guyana, dropped as much as 7.2% in Hong Kong. Sydney-listed Oil Search Ltd. was down about 16%, while Japanese producer Inpex Corp. lost as much as 5.2%.

Industrial output data from China, the world’s biggest oil importer, added to fears over oil demand. The country suffered an even deeper slump than expected at the start of the year as the virus shuttered factories, shops and restaurants across the nation.

Gross domestic product is now all but certain to contract in the first quarter compared with the same period last year -- the first time that has happened since comparable data begins in 1989.