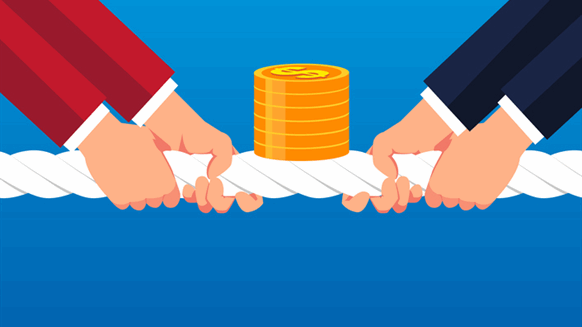 Oil was caught between the specter of a full-blown U.S.-China trade war damping demand and a supply backdrop ripe with potential risks.

(Bloomberg) -- Oil was caught between the specter of a full-blown U.S.-China trade war damping demand and a supply backdrop ripe with potential risks.

Futures in New York edged higher after swinging between an 0.7% loss and a 0.3% gain. U.S. officials are expected to release details of additional tariffs of 25% on all remaining Chinese imports Monday. That came after Beijing vowed retaliation for Washington raising levies on $200 billion of Chinese goods Friday. An attack on two Saudi Arabian oil tankers on their way to the U.S. highlighted the risk of rising tensions in the Middle East disrupting oil flows.

After posting the biggest quarterly gain in almost a decade, oil has been losing ground since late last month. Signs that Saudi Arabia will pump more to make up for lost Iranian barrels and the deteriorating U.S.-China relations are the main reasons, and have spurred more bearish bets on West Texas Intermediate crude. Still, rising tension between Washington and Tehran and the likelihood of Venezuelan output falling further are supporting prices.

“Don’t let Friday’s glass-half full optimism take away from the fact that a trade war of this magnitude is very damaging for global growth,” said Howie Lee, an economist at Oversea-Chinese Banking Corp. in Singapore. “But the stickiness of prices around current levels reveals how tight supplies are.”

West Texas Intermediate crude for June delivery rose 9 cents to $61.75 a barrel on the New York Mercantile Exchange at 7:37 a.m. in London after falling by as much as 45 cents earlier. The contract lost 0.5 percent last week.

Brent for July settlement added 37 cents, or 0.5 percent, to $70.99 a barrel on the London-based ICE Futures Europe exchange after being down as much as 31 cents earlier. It fell 0.3 percent last week. The global benchmark contract is trading at a $9.10 premium to WTI.

Chinese state media blamed the U.S. for the breakdown in trade negotiations and talked up the nation’s economic resilience, while President Donald Trump said that America was “right where we want to be.” Larry Kudlow, Trump’s top economic adviser, said Sunday that no further talks had been scheduled, though he raised the possibility that the U.S. and Chinese leaders could meet on the sidelines of a Group of 20 summit in Japan at the end of June.

Asian stocks resumed declines on Monday, after rising Friday, and the offshore yuan fell to the weakest level this year. The Bloomberg Commodity Index dropped to near a four-month low, with soybeans among the biggest decliners.

The Saudi tankers were damaged Sunday while heading toward the Persian Gulf, the state-run Saudi Press Agency reported. The U.S. has deployed an aircraft carrier, bomber planes and defense missiles to the region amid rising tensions with Iran, which has threatened to block the Strait of Hormuz, the world’s most important choke-point for oil.

The incident comes after an outage at a field in the Norwegian North Sea last week that affects around 6% of Norway’s total oil output. Meanwhile, working American rigs fell by two to 805 last week, according to data from Baker Hughes. That’s the third decline in four weeks.