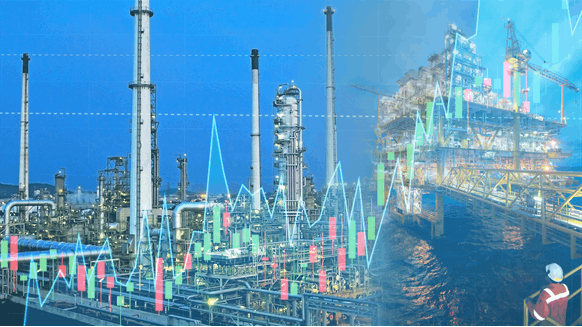 Oil clawed back some gains after plunging 29 percent last week.

(Bloomberg) -- Oil clawed back some gains after plunging 29% last week as the U.S. signaled the possibility of a joint U.S.-Saudi Arabia alliance to stabilize prices.

Futures in New York rose 3.2% Monday in a mixed day of trading. Prices initially bounced following a second wave of initiatives by the Federal Reserve to support a shuttered American economy. A rally in other risk assets such as equities was soured by a second failed effort by Congress to agree on a stimulus bill.

“Almost hitting the lower trading bounds in the 20s has given some support for WTI and Brent,” said Ryan Mckay, commodities strategist at TD Securities. “Generally, the stimulus is helping sentiment, even if it’s not helping demand. Investors may be hanging on to a sliver of hope that an OPEC-Texas relationship may transpire.

U.S. Energy Secretary Dan Brouillette said the possibility of a joint U.S.-Saudi oil alliance is one idea under consideration to stabilize prices after the worst crash in a generation.

“As part of the public policy process, if you will, our interagency partners often get together and talk about a number of different items, but we’ve made no decision on this,” he said. “At some point we will engage in a diplomatic effort down the road. But no decisions have made on anything of that nature.”

Oil has lost 48% in March alone as the coronavirus outbreak brings economies worldwide to a standstill. U.S. lawmakers failed to agree on a stimulus bill over the weekend and again fell short of the needed Senate votes on Monday.

The severe demand shock has dimmed traders outlooks for consumption with some estimating a collapse of as much as 20 million barrels a day this year.

At the same time, a price war between Saudi Arabia and Russia showed no signs of abating. Hopes for a production deal between OPEC and Texas faded amid mounting criticism by regulators and drillers in the biggest U.S. oil state.

WTI for May delivery gained 73 cents to settle at $23.36 a barrel on the New York Mercantile Exchange.

Brent for May settlement lost 5 cents to settle at $27.03 a barrel on the ICE Futures Europe Exchange after dropping to as low as $24.68 earlier. That’s less than the benchmark’s $24.88 a barrel close on Wednesday, which was the lowest since May 2003.

Gasoline futures settled at the lowest level since 1999. U.S. cities are poised to see pump prices below $1 a gallon as the pandemic sharply curtails transportation amid widespread economic shutdowns.

Even if crude demand recovers to normal levels by the middle of the year, 2020 is still on course to suffer the biggest decline in consumption since reliable records started in the mid-1960s. Until now, the biggest annual contraction was recorded in 1980, when it tumbled by 2.6 million barrels a day as the global economy reeled under the impact of the second oil crisis.

To contact the reporters on this story:
Jackie Davalos in New York at jdavalos10@bloomberg.net;
Grant Smith in London at gsmith52@bloomberg.net