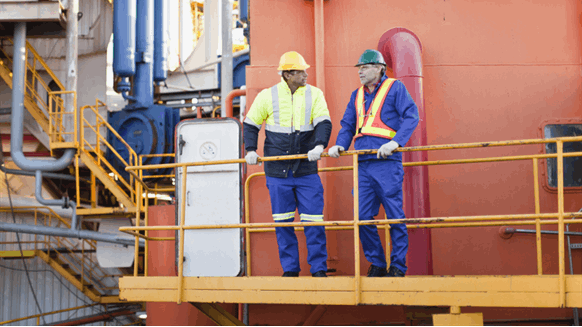 (Bloomberg) -- When 62-year-old Tomas Morales registered a fever of 101.3 Fahrenheit on April 14, the doctor told him to self-isolate. But there was a problem: Morales was on an oil platform off the Mexican coast only reachable by helicopter, and he shared a bedroom with three other workers.

Morales improvised, using a curtain to separate his bed from those of his companions, yet they still had to use the same bathroom. It took two days for Morales to be evacuated from the platform, followed by a three-hour bus trip to his home and, eventually, a move into a company-run hospital.

Morales’s case and others open new questions about the ability of Mexico’s state-owned oil company, Petroleos Mexicanos, to protect workers amid the Covid-19 pandemic. Seventy-two workers and two contractors have died from the virus, the company reported on Monday. As many as eight died in one day.

“We weren’t prepared,” Morales said, speaking by telephone from his home in Paraiso. “There weren’t sufficient control measures for Covid-19 because this was something totally new for everyone.”

Critics say Pemex’s actions mirror that of the administration of President Andres Manuel Lopez Obrador, which was slow to enforce a national lockdown and has chosen not to shut down its ports of entry or restrict visitors from countries with a high number of Covid-19 cases.

Pemex responded in a statement that it’s taking great pains to protect its workers. The company is “sanitizing, sending workers home, and taking other measures to distribute supplies to keep work places and equipment clean.”

Oil companies in the Gulf of Mexico are grappling with the challenge of maintaining operations amid social distancing and sanitizing on thousands of offshore drilling rigs and oil production platforms. The platforms house hundreds of people and require workers to sleep in shared rooms and eat together in crowded dining halls.

Yet the death toll at Pemex has soared above peers.

As of May 22, there were no deaths in the U.S. Gulf of Mexico among “about 25,000 people rotating on and offshore”, according to Justin Williams, a spokesman for the National Ocean Industries Association. Brazil’s Petrobras, which has about 40% fewer employees than Pemex, has not reported fatalities from Covid-19. Brazil’s National Petroleum Agency says one offshore contract worker died from the virus, without saying which company the person worked for.

“It is necessary to emphasize the importance that people who work in strategic facilities in the country, such as oil and electricity, are taken care of in a timely manner, and that all necessary measures are taken to prevent outbreaks both in the personnel (in the facilities) as well as in their communities,” said Dr. Mauricio Rodriguez, spokesman for the Covid-19 committee at the National Autonomous University of Mexico.

Pemex’s relatively new management team, which took over after Lopez Obrador became president in December 2018, is at least partly to blame for not containing the virus, said Pablo Lopez Figueroa, a Pemex employee and representative of the National Union of Petroleum Technicians and Professionals. The newly formed oil workers’ union competes with the official Pemex union.

“General management has zero oil experience, very little capacity to understand technical activities and no clear idea of how to reduce the risk of contagion right now in the marine area,” said Figueroa, speaking over the phone from Paraiso, Tabasco.

Morales, the platform worker, wasn’t tested for the virus until 10 days after his fever started. The mechanical integrity engineer at the Abkatun-Pol-Chuc offshore field, said others on his platform had also complained of flu-like symptoms.

“The platform doctor told me to hold it together because there were others more screwed than I was,” he said.

Pemex faces the added challenge of reversing 15 years of oil output declines and staggering debt, the highest of any oil major. Its strategy of accelerating drilling in onshore and shallow-water fields hit a roadblock as cities all over the world came to a halt amid efforts to stem the Covid-19 outbreak, and it faces a glut in fuel supply as demand has cratered.

While oil companies the world over are reducing capital expenditure amid the oil price crash and pandemic, Lopez Obrador has tasked Pemex and the Energy Ministry with continuing daily work on a new $8 billion refinery in the president’s home state. The so-called Dos Bocas refinery is symbolic of the government’s agenda to rid the country of dependence on foreign gasoline markets, with works continuing even as non-essential businesses across Mexico are under lockdown.

After Pemex evacuated Morales from the oil platform, the company told him to self-isolate in a hotel in Ciudad del Carmen, Campeche -- and to pay for it himself, he said. Instead, he hopped on a three-hour bus to his home in Paraiso, Tabasco. There, Morales’s fever worsened and he was eventually sent to a Pemex-run hospital in Villahermosa, the capital of Tabasco. “I was in very bad shape by the time they brought me to the hospital in an ambulance,” he said.

The doctors diagnosed Morales with pneumonia and put him on oxygen that helped him recover.

Morales is already expected to return to the rigs as early as June 4 after being evaluated by a doctor. But the seasoned engineer is optimistic. He said that Pemex told him they’ve increased sanitation measures on platforms and reduced the number of people who can eat together in the mess hall by half - roughly 50 people.

“I still feel panicked. But I will go back because I love my job,” Morales said. “Today I am much better, 90% recuperated, thank God.”

--With assistance from Peter Millard, Sheela Tobben and Andrea Navarro.

To contact the editors responsible for this story:
David Marino at dmarino4@bloomberg.net
Nacha Cattan, Reg Gale