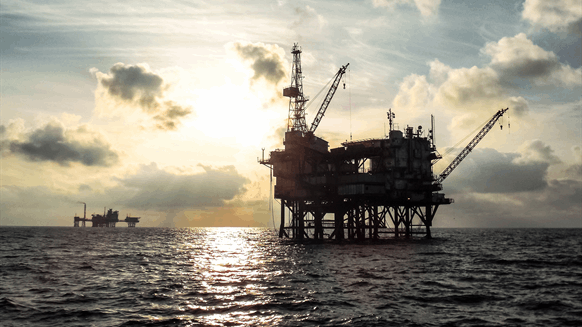 Abandonment costs may haunt the industry in the years to come.

(Bloomberg) -- Aging offshore oil wells that once brought market prominence to Europe, the U.S. Gulf and Brazil are increasingly money losers that companies want shut down amid low oil prices and a struggling global economy. But the effort won’t be cheap.

The cost worldwide: An estimated $104.5 billion by 2030, according to Wood Mackenzie Ltd. At least 23 platforms a year could be retired in the North Sea alone, Rystad Energy Inc. reported in May, while the national oil company in Brazil has said it’s planning to spend $6 billion to retire 18 platforms, pipelines and other infrastructure by 2025.

Companies can’t just abandon aging offshore wells. In most cases, regulators who approved them required pricey guarantees to make sure they’re properly sealed, and there are environmental issues involved in their upkeep. That can mean the use of divers or robot submarines to plug wells and pipelines on the ocean floor, an expensive proposition, as well as cutting apart and moving steel platforms that can weigh as much as 17,000 tons.

“Abandonment costs will haunt the industry in the years to come, especially if governments get tougher with parent company guarantees,” said Marcelo de Assis, the head of Latin American upstream research at Wood Mackenzie Ltd. “The crisis fast forwarded the situation.”

The spectacular decline in North Sea production since it peaked in the 1990s has left so much equipment unused that, by 2025, oil companies will spend more on removing redundant equipment than developing new fields, according to Wood Mackenzie.

Deepwater production was a new frontier for the oil industry in the 1980s and 1990s, and many of these projects are now reaching the end of their lives.

But the push to close offshore wells comes as the oil industry has suffered some major blows. They include a price war between oil giants Saudi Arabia and Russia that flooded the world with oil, a pandemic that destroyed demand and skepticism from investors who want less money spent on exploration and more returned to them.

At the same time, the U.S. shale boom has drastically lowered the cost of opening and operating a well on land, as well as closing one, compared with the price tag tied to wells offshore.

Despite a recent uptick in oil prices, they remain too low and volatile to lure buyers to the aging and small-producing fields Brazil’s Petroleo Brasileiro SA. and other deep-water operators are walking away from. The small- to mid-sized producers with low enough costs to turn a profit from exhausted oil fields are protecting their balance sheets, and banks are reluctant to provide funding.

In the U.S. Gulf of Mexico, which generates about 15% of the nation’s output, explorers are expected to spend about $1 billion a year over the next half decade to decommission hundreds of wells, according to Wood Mackenzie.

While the collapse in oil prices is having an effect on more offshore wells permanently shut, there’s also a push in the Gulf to extend the lives of some aging infrastructure. The key: Drilling new wells near existing platforms that can be fed by undersea pipelines as a way to cut costs.

“Companies are doing everything they can to avoid abandoning facilities because that’s very expensive,” Justin Rostant, principal analyst at Wood Mackenzie, said in a phone interview. “They’re just bringing in third-party production wherever they can to extend the life of these facilities.”

It costs an average of $10 million per well in deepwater and about $500,000 a well in shallow waters to plug and abandon a well in the Gulf of Mexico, Rostant said. Most wells shut down in the U.S. Gulf are coming from shallow waters, where the wells are the oldest and have lost their ability to make money.

Rudolf Huber  |  June 08, 2020
Wait a minute - large scale offshore oil is not profitable anymore. I guess thats been the case since before COVID-19 and the price war. But those projects are gargantuan and have very long lead times to come into existence which means that higher prices for a year or so won't get any of them sanctioned. But when shale reacts so much faster, will there be any more offshore oil? And maybe shale was not the target of Russia and Saudi? Maybe they wanted to kill offshore all along knowing that shale would bounce back but it makes a great diversion? maybe?
Richard Semeniuk  |  June 05, 2020
You have missed the abandonment of 5000 Temporarily Abandoned wells that were never produced and not counted in your wells connected to a producing platform. These 5000 TA' wells were left, since they were typically only appraisal wells, prior to the wells that were classified as developy wells in a particular field. Each of the TA'd wells are estimated to cost approximately $30,000,000 / per well to abandon as per regulations specifications