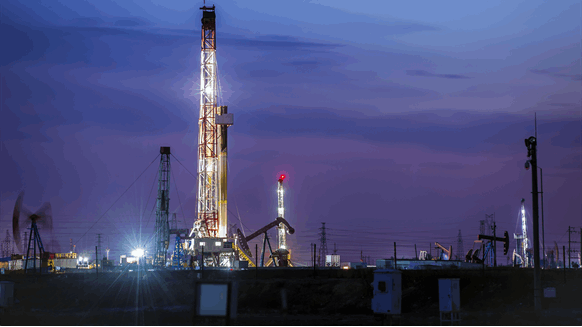 CEO Vicki Hollub expects Oxy to get more out of the Anadarko assets than any of its competitors.

(Bloomberg) -- Occidental Petroleum Corp.’s Vicki Hollub defended her $38 billion pursuit of Anadarko Petroleum Corp. as she and eight other company directors survived a shareholder vote that had turned into a proxy referendum on the deal.

Investors won’t get to vote on the Anadarko takeover -- a contentious point for some -- but they had their say on the company’s board Friday. While all the nominated directors were elected, the margin of the voting, ranging from 70% to 82% approval, was unusually low.

Hollub addressed shareholders at their annual meeting in Houston hours after signing an agreement on what’s set to be the largest oil industry takeover in four years, having seen off rival bidder Chevron Corp.

“We are the rightful owner” of Anadarko, Hollub said. “We’ll get more out of those assets than any of our competitors.”

Her defiance capped a hectic four weeks, during which her two-year quest to buy Anadarko became public knowledge after Chevron made its move with a $33 billion merger agreement. Occidental went on the offensive to break up the Chevron deal, presenting its own cash-and-stock offer and enduring criticism as some investors questioned whether the proposed deal would be too much of a stretch financially.

Hollub flew on the company Gulfstream V to meet Warren Buffett and secure a $10 billion cash infusion and to get $8.8 billion commitment from Total SA to buy unwanted assets once the Anadarko transaction is completed. Occidental also secured a $21.8 billion bridge loan from Bank of America Corp. and Citigroup Inc. to help finance the takeover, according to a filing.

“I’m happy with Warren Buffett for being there,” said Hollub, who met with the billionaire for 90 minutes last month to negotiate investment terms. “The timing was critical for us to get this deal when we did.”

Under terms of the definitive agreement announced late Thursday, Anadarko is on the hook for a $1 billion breakup fee if it backs out. If Occidental walks away, it must reimburse Anadarko for the $1 billion Chevron received after the California-based oil giant bowed out of the bidding war.

While the proposed acquisition didn’t require formal shareholder approval, some investors -- including T. Rowe Price Group Inc. -- indicated they would register their displeasure by voting against the re-election of Hollub and other directors. Another indication of investor unease was approval at Friday’s meeting of a proposal that will make it easier for shareholders to summon a special meeting. The measure had been opposed by the company.

Occidental’s stock extended losses for a second day, dropping 2.4% on Friday to hit a 10-year low. The pressure is now on Hollub and her team to deliver the $3.5 billion in cost cuts and savings she promised.

At Friday’s meeting, Hollub presented a 15-minute video about the company’s 2018 exploits and then addressed reporters sitting at the back of the conference room. "Much to the chagrin of our PR department, I’m going to go off script here," she said.

“What you should know is I’m an engineer: my experience with M&A is very limited,” said the 59-year-old CEO, who has spent her entire career at Occidental.

She then proceeded to introduce her “M&A dream team” by name and detailed their roles in the transaction. Senior Vice President Oscar Brown received a special mention for accompanying Hollub on her trips to Omaha and Paris to meet with Buffett and Total executives, respectively.

Certain parts of the media have "confused determination with desperation," she said. “We approached this deal from a position of strength.”

Andrea  |  May 17, 2019
The biggest losers in this deal are the Anadarko employees.
gordon swanson  |  May 13, 2019
This 'win' is crazy attractive for the Oracle of Omaha. Factoring in the cost of the warrants ups the cost to OXY to at least 10% after tax!!!! The pre tax cost has to be more crazy. Not sure this is a great time to be an employee of Anadarko.