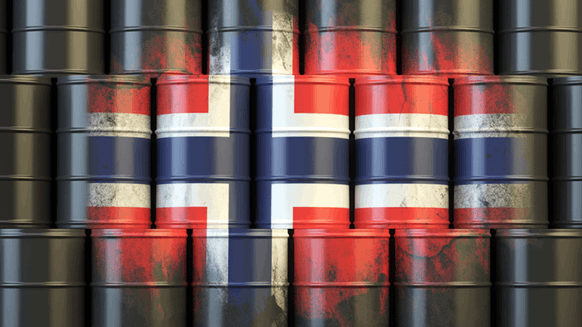 The Norwegian government proposed spending $29B of its oil income and wealth to plug a deficit equal to 7.7% of gross domestic product, roughly unchanged from this year.

(Bloomberg) -- Putting on the brakes is a relative term in Scandinavia’s richest economy.

The Norwegian government on Thursday proposed spending 231.1 billion kroner ($29 billion) of its oil income and wealth to plug a deficit equal to 7.7 percent of gross domestic product, roughly unchanged from this year. To do this, it will withdraw 72 billion kroner from its massive wealth fund, up from a lower-than-estimated 57 billion kroner in 2017.

The budget shows an increase in overall spending of about 3 percent, outpacing revenue growth of 2 percent. Net cash-flow from petroleum will rise 4.3 percent next year and be 47 percent higher than in 2016. Western Europe’s biggest oil producer sees an oil price of 438 kroner ($55) per barrel in 2018, unchanged from this year.

“The fiscal policy rule allows for phasing in of oil money from one year to the next, but what we have been clear about is that we are giving less gas because things are going better,” Finance Minister Siv Jensen said Thursday. “This is a budget that looks very well adapted to the new reality.”

The “fiscal impulse” next year will be 0.1 percent, down from 0.4 percent this year. Oil cash spending will be 2.9 percent of the wealth fund in 2018, unchanged in percentage terms and below the 3 percent spending rule. Mainland economic growth will accelerate to 2.5 percent next year, with unemployment dipping to 4 percent and employment surging by 1.1 percent.

Norway’s newly re-elected Conservative-led government is slowing the growth in oil wealth spending as a deep slump in its oil industry has come to an end and stabilizing crude prices lift revenue. Hit hard by a drop in crude prices in 2014 that sent shock waves through the economy and saw more than 50,000 jobs lost in oil-related industries, the government rapidly boosted spending to avoid an outright recession.

Withdrawals from the oil fund sank sharply this year from 88 billion kroner in 2016. That will be a relief to the fund, which has struggled to keep up returns amid record low interest rates. It will also give it added money as it expands its holdings of stocks to 70 percent from 60 percent.

The government proposed cutting the base tax rate individuals and corporations to 23 percent from 24 percent, and the valuation discount for shares and operating assets in the net wealth tax is increased to 20 percent from 10 percent. But it also proposed raising the fee on the heaviest electric cars, potentially hurting Tesla Inc. sales, and removing a tax exemption on short-term home rentals, which could impact Airbnb Inc.

The minority government of Conservatives and the Progress Party will now need the backing of the Christian Democrats and the Liberal Party to pass the budget.

“The starting point is good for the negotiations,” said Terje Breivik, financial spokesperson at the Liberals, and member of the finance committee.

Economists warn that keeping oil spending close to the 3 percent fiscal spending rule is dangerous amid a potential correction in the world’s financial markets and as the Norwegian krone is set to strengthen.

“The fund is a bit inflated, given that the krone is exceptionally weak and as the economy is normalizing in the next few years,” said Kyrre Aamdal, senior economist at DNB, Norway’s biggest lender. “One should take into account that the currency will strengthen, and in isolation, will contribute to a lower value of the fund in kroner.”

“The big trap is that the 3 percent is now calculated from a very low krone,” said Trond Giske, deputy leader of Labor, and newly appointed leader of the finance committee.

And that could force the central bank’s hand to tighten earlier than planned if fiscal stimulus is too expansive, according to  Danske Bank’s Frank Jullum.

“It will now be much more challenging for the politicians,” said Jullum.