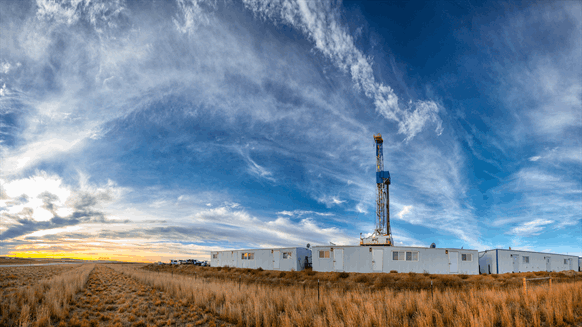 Some of oil reserves may get stuck underground if the industry's pumps keep failing.

(Bloomberg) -- Imagine trying to slurp a thick chocolate shake through a J-shaped straw four miles long. That’s the kind of cheek-puckering test the American shale industry must overcome to prolong a record boom in oil output.

For almost a decade, drillers have been using new techniques to tap vast petroleum reserves scattered within deep, porous rock layers in places like west Texas, Pennsylvania and southern Canada. By digging extra-long wells that went down and then sideways at different angles, engineers were able to capture a lot more crude than from a vertical hole.

While those new methods unlocked a torrent of new supply and turned the U.S. into the world’s largest producer, the increased difficulty of sucking fluid from so far underground is overwhelming pump systems that have changed little in decades. The mismatch is causing more well failures, rising costs at a time of low prices, and a scramble by companies like Exxon Mobil Corp. for alternative ways of maintaining flows.

“Every horizontal well -- no matter where you are -- has this problem,” said Jeff Saponja, chief executive officer of Heal Systems, a Calgary-based engineering company that is working with Schlumberger Ltd., the world’s biggest oil-service provider, on developing products that make pumps and pipes work more efficiently.

Extracting oil is usually easy at first as liquid gushes to the surface. But that quickly fades as the pressure eases, so producers rely on pumps that slowly extract the bulk of the reserves over years or even decades. The most common variety is a pumpjack -- more commonly known as a nodding donkey -- a technology that’s been in use for more than a century.

The nodding donkey has a steel hammerhead hovering over the well, bobbing up and down to create suction in the hole, aided by a rotating counterweight. The method is effective on vertical wells that go straight down, but is less so when used on horizontal ones. It’s not uncommon for a shale well to go down a mile, then use another 800 feet of pipe to bend from vertical to horizontal before continuing sideways for a another mile or more.

Pumpjacks on vertical wells can last five or six years without any problems, said Jesse Filipi, who until last year worked as an engineer for Marathon Oil Corp. and was responsible for about 700 producing wells in the Eagle Ford Shale deposit in south Texas. The same pumps might not last two years on the newer horizontal wells, he said.

“You’re trying to understand what’s going on, and then you start to realize, it’s just not quite working the way everyone tells you it should be working,” said Filipi, who now works for Ambyint Inc., an oil-technology company in Calgary that focuses on ways to improve pumping systems that the industry refers to as artificial lift.

To be sure, there are only about 50,000 horizontal wells in the U.S. and Canada that use nodding donkeys, compared with a total of 1.2 million production wells in the region, according data compiled by Ambyint.

But horizontal wells have been central to a resurgence of North American output. The shale boom helped to double U.S. production since 2005. It’s now the highest ever, exceeding even Saudi Arabia, according to BP Plc data. Texas, home to the biggest shale deposits, saw output triple.

Yet some of those oil reserves may get stuck underground if the industry’s pumps keep failing, which boosts costs for shale deposits that were initially cheap to exploit and often remained profitable even when crude fell to $50.

“If you’re failing your pump all the time, you’re not getting low lifting costs,” said Saponja, who had first-hand experience when he worked at a small exploration and production company in the Bakken shale region of North Dakota. Over a two-year period, Saponja said he replaced its pump more than half a dozen times.

“There is no one favorable solution for the problem,” said Cem Sarica, director of a research group at the University of Tulsa in Oklahoma that is trying to develop alternatives with funding from companies including Exxon and BP.

One workaround engineers have used is to shove natural gas into the hole to lighten the oil and make it easier to pump to the surface. Another is placing an electric-submersible pump, or ESP, down in the well. While both techniques work during the early stages in the life of a well, they often aren’t as effective after output falls.

And then there are the slugs. That’s what engineers call the separation of oil and gas in the horizontal pipes, which are often so long and bendy that they create small hills and valleys that allow the hydrocarbons to accumulate. The variations caused by big pockets of oil followed by large amounts of gas is too chaotic for most pumps to handle.

The oldest shale wells in North America are only about seven or eight years old, so the industry has only recently figured out the problems and begun looking for more efficiency, said Francis O’Sullivan, a researcher at the Massachusetts Institute of Technology in Cambridge.

“There’s a need now,” O’Sullivan said. “If we’re looking at the shale resource as a bigger component of our national production basin, that we try and apply the best possible husbandry to the resource. That’s in the national interest."

Thomas Bath  |  December 12, 2017
Learned something new. I have been in the oil business for 35 years and have never heard "nodding donkey" before. No one at the office has either.. Thanks for teaching us something new. Tom