Most US Oil Executives See Prices Below $60/Barrel Through 2018 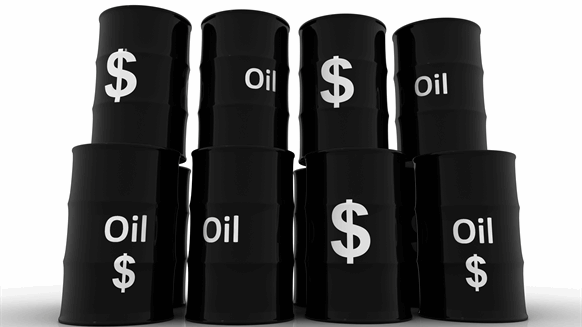 Nearly two-thirds of US oil executives see crude oil prices remaining below $60 per barrel through 2018, according to a Deloitte survey.

HOUSTON, Oct 11 (Reuters) - Nearly two-thirds of U.S. oil executives see crude oil prices remaining below $60 per barrel through 2018 and not hitting $70 until at least the next decade, according to a survey published on Wednesday by consultancy Deloitte Services LP.

The survey, based on a poll of 250 executives at companies that produce, transport and refine oil and natural gas, reflects a shift from last year when many respondents forecast commodity prices would rise and capital spending budgets grow.

U.S. oil prices fell slightly on Wednesday to $50.79 per barrel.

This year's more dour view, especially among shale industry managers, comes as executives are focusing on cost controls and returns and have largely stopped looking for a rise in commodity prices. This new paradigm is encouraging shale producers to base executive compensation on the best uses of capital, a strategy designed to keep costs low.

"The bottom line is that companies should focus on cost discipline and operational efficiency," said Andrew Slaughter, head of Deloitte's Center for Energy Solutions.

"The new reality seems to have set in; waiting for a significant price recovery may be a long haul."

Half of executives polled said they expect capital spending to drop next year, and nearly 60 percent said they expect a decline in the number of drilling rigs active across the United States.

Production in the shale industry requires constant investment to keep up with well decline rates. Those polled said they expect to maintain or increase current production levels into 2018, though a drop in spending could prevent any sizable increase in U.S. output, helping to resolve a global supply and demand imbalance.

That would fit well into a plan by the 14-member Organization of the Petroleum Exporting Countries, which on Wednesday forecast higher demand for its oil in 2018 and a worldwide supply deficit.

In a wary sign for oilfield service providers, including Halliburton Co and Baker Hughes,, roughly half of those surveyed by Deloitte expect service costs to slip next year. Greater well efficiency and new technologies - long touted by industry executives as a cure-all for low prices - were seen as having less of an impact on costs.

The mood among executives was less pessimistic for natural gas prices, with those polled saying they expect prices to rise above $3 per million British thermal units into next year. Natural gas futures rose 1.5 percent on Wednesday to $2.93 per mmBtu.

James Drouin  |  October 13, 2017
"Most US Oil Executives See Prices Below $60/Barrel Through 2018" The accuracy of that prediction is almost entirely dependent on the future of the US economy which, though improving significantly, still hasn't resulted in higher gasoline sales (sales are still moving sideways at ~25mgal/day vs pre-recession of +60mgal/day). And, until gasoline sales volume start showing a noticeable month-to-month increase, crude oil prices are going to mostly move sideways as well.
RELATED COMPANIES
Company: Deloitte Consulting more info