Millions of Barrels of Oil Halted Near Turkey 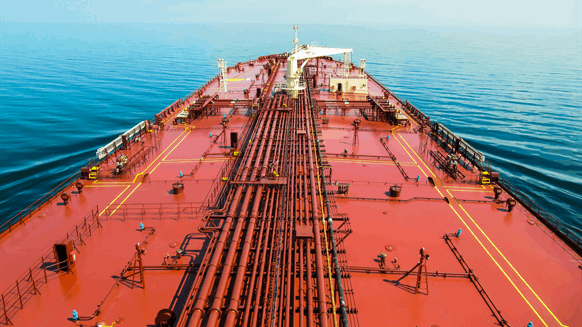 A backlog of oil tankers at the Turkish straits continues to build up.

A backlog of oil tankers at the Turkish straits continues to build up as negotiations failed to produce a solution to an insurance glitch caused by sanctions on Russian crude.

Twenty six tankers holding more than 23 million barrels of oil from Kazakhstan were unable to pass the Bosphorus and Dardanelles straits as of Wednesday, shipping data compiled by Bloomberg showed. The waterways are vital chokepoints for the flow of crude and other commodities from the Black Sea. Kazakh authorities estimated a smaller backlog.

Late last month, Turkey announced that passing tankers would have to provide letters from their insurers proving they were covered to navigate the straits, through which almost 700 million barrels of crude flowed in the past year. Turkey’s move was a response to European Union sanctions against Russia that bar insurance of vessels if the oil they’re carrying costs above $60 a barrel.

US and UK officials are pushing for Turkey to reconsider the proof-of-insurance requirement, especially given that cargoes from Kazakhstan are not subject to sanctions. So far they’ve been unsuccessful.

The US Treasury Department, which devised the so-called price cap for Russian crude to soften sanctions, said in a statement Wednesday that Deputy Secretary Wally Adeyemo told Turkish Deputy Foreign Minister Sedat Onal that the program only applies to oil of Russian origin and “does not necessitate additional checks.”

“Both officials highlighted their shared interest in keeping global energy markets well-supplied by creating a simple compliance regime that would permit seaborne oil to transit the Turkish straits,” the Treasury Department said in the statement.

All Kazakh tankers and cargoes have been insured and the companies providing the cover — mainly British insurers - are holding talks with Turkish authorities, news agency Tass reported Thursday, citing Magzum Mirzagaliev, chief executive officer of national producer NC KazMunayGas. He estimated that only eight to 10 of the tankers stuck in the Turkish straits are “related to Kazakhstan.”

A local port agent report said that only one laden tanker — the Vladimir Tikhonov — has passed through the straits since Turkey’s new rule entered into force. That ship is thought to have had Russian cover. Until the insurance impasse is resolved, it’s impossible to estimate when the vessels might be allowed through, the agent said.

As of Thursday morning local time, the situation remained unresolved, it said.

For insurers, issuing the documentary evidence is both an extra piece of bureaucracy, but it also sets a potential precedent that other locations might seek to follow.

Tankers often end up waiting a several days at the straits at this time of year anyway because of shortened daylight hours for transit and bad weather.