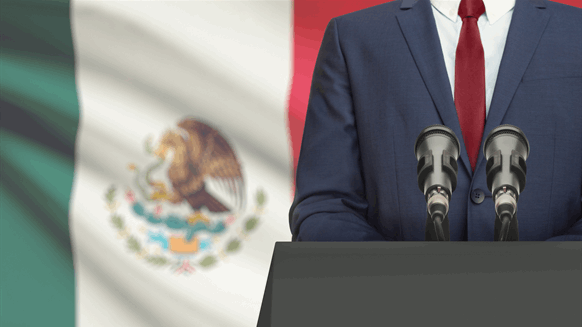 Leftist presidential front-runner says if he wins July election, he will ask President Nieto to stop at least 2 energy auctions scheduled to take place before the new president takes office.

Andres Manuel Lopez Obrador is a long-time skeptic of Pena Nieto's energy reform, enshrined in 2014, and he and his team have delivered fluctuating messages on what they would do if they win. Foreign investors and energy companies are paying close attention to what might happen in one of the most important, and recently opened, energy markets in the Americas.

There are two official authorized oil auctions - in July and September - that could be threatened by Lopez Obrador's comments, and the energy ministry wants to squeeze in another before Pena Nieto leaves office, although it has yet to be given the green light.

Speaking in Mexico City on the 80th anniversary of the nationalization of the country's oil industry, Lopez Obrador also said that within three years of his possible six-year term, Mexico would stop buying foreign fuel, following extensive upgrades of the country's refining sector.

His government would also stop selling crude abroad to focus on value-added fuel production, he added.

"I'm going to ask (Pena Nieto) that he doesn't hand out any more oil blocks, neither onshore or shallow waters, and that he puts a stop to the privatization of oil and electricity sectors," Lopez Obrador said.

If Lopez Obrador wins the July 1 vote, he would take office on Dec. 1.

Since the energy reform was enacted, Mexico has conducted eight oil and gas auctions, awarding some 90 contracts covering onshore and offshore acreage.

The energy reform ended state oil company Pemex's nearly 80 years of monopoly control over the sector and paved the way for the auctions, ending a long-standing constitutional prohibition on private companies operating fields on their own.

Lopez Obrador, who enjoys a double-digit poll lead over his rivals, also gave a clear indication of what his government's larger energy polices would be.

"I'm committed to having stopped buying foreign fuels by midway through the next six-year term, because we're going to rehabilitate the six existing refineries and we will build two big refineries," he said.

"We're not going to sell crude oil abroad. We're going to process all the raw material in our country to lower the price of fuel."