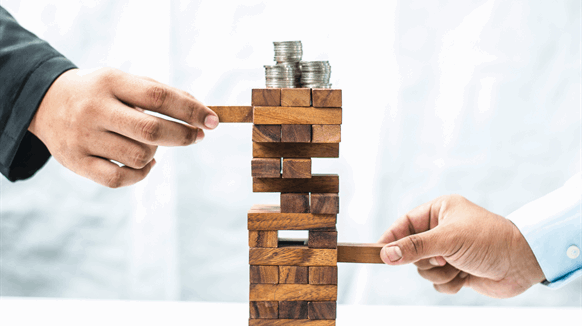 McDermott International Inc. secured $650 million of new financing from lenders to keep itself afloat, though the withdrawal of its 2019 outlook and high debt costs dragged its shares and bonds back down.

(Bloomberg) -- McDermott International Inc. secured $650 million of new financing from lenders to keep the embattled energy-industry contractor and engineer afloat, though the withdrawal of its 2019 outlook and high debt costs dragged its shares and bonds back down from a surge.

The Houston-based company, which will get immediate access to a $550 million term loan and a $100 million in letters of credit, plans to use the funds to finance working capital and support the issuance of performance guarantees, according to a statement Monday. McDermott also announced the guidance withdrawal as well as the halt of efforts to sell its industrial storage tanks business.

While the financing is a lifeline that may avoid help McDermott avoid bankruptcy, the outlook withdrawal signals “near-term performance uncertainties or working capital challenges,” according to Bloomberg Intelligence. The company’s stock and bonds have cratered this year after it struggled with debt taken on from its $3.5 billion acquisition of Chicago Bridge & Iron Co. in 2018. It’s also grappling with reduced spending by the oil and gas industry.

To avert its cash crunch, McDermott agreed to pay around 10% interest rates on the rescue loan. The initial $650 million is part of a rescue financing package totaling $1.7 billion provided by some of its existing secured lenders, according to a filing Monday.

Shares of the company initially soared 29%, the most in a month, before tumbling as much as 14% in New York. While its 10.625% bonds due 2024 posted the biggest gain and volume among high yield debt on Monday, they reversed that advance. They are now leading high-yield market declines, dropping 5.6 cents on the dollar to about 23 cents. The debt now yields nearly 65%.

The company said it’s still exploring a sale of its Lummus Technology unit and its pipe-fabrication business. It said last month it had received expressions of interest valuing Lummus at as much as $2.5 billion.

--With assistance from Jeremy Hill.

To contact the editors responsible for this story:
Simon Casey at scasey4@bloomberg.net
Pratish Narayanan, Christine Buurma