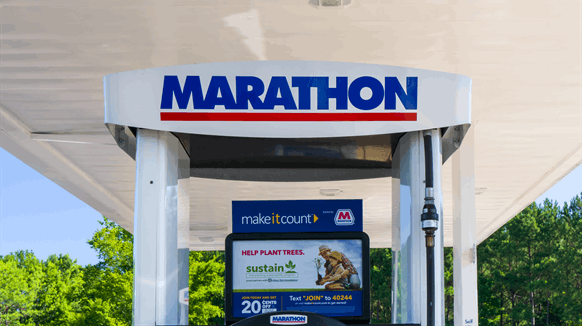 Marathon Petroleum buckled under pressure from activist investors and announced the spinoff of its retail fuel-station business and the departure of CEO Gary Heminger.

(Bloomberg) -- Marathon Petroleum Corp. buckled under pressure from activist investors and announced the spinoff of its retail fuel-station business and the departure of Chairman and Chief Executive Officer Gary Heminger, a four-decade company veteran, who’ll retire next year.

Marathon confirmed the plan Thursday, along with the formation of a special board committee to review the Findlay, Ohio-based company’s pipeline business. Executive Vice Chairman Gregory Goff, who has been discussed as a possible next CEO, also said he’s retiring. Marathon fell 2.6% to $64.50 in New York after earlier dropping as much as 7.3%.

A group of shareholders including Elliott Management Corp. had called on Marathon, the second-largest U.S. oil refiner, to improve its performance. Elliott pushed for Marathon to break itself up into three separate companies: retail, which largely operates under the Speedway brand, refining and pipelines. Other investors had agitated for Heminger’s ouster.

“The actions announced today will unlock substantial value for shareholders,” Elliott said in a statement. “We commend Gary and the Board for taking action to allow these businesses to realize their full potential.”

Heminger -- who was given an exemption from the company’s age-65 mandatory retirement rule in July 2018 -- took charge of the fuel maker when Marathon Oil Corp. spun off the business in 2011. While he has previously assuaged investors including Jana Partners and overseen a five-fold rise in dividend payouts, the company faltered more recently as it sought to expand through acquisitions, including the purchase of rival Andeavor.

Heminger’s retirement from Marathon will come after next year’s annual shareholders meeting. A nationwide search is under way for his replacement and the board has formed a committee to evaluate candidates both in and outside of the company. Heminger is also stepping down as CEO of MPLX LP, the publicly traded pipeline partnership controlled by Marathon, and will be replaced by Michael J. Hennigan.

Goff’s retirement will take effect at the end of this year.

”The strategic moves are a step in the right direction to unlock the full company value,” Jason Gabelman, an analyst at Cowen, said Thursday in a note to investors. “However, the changes invite a multitude of questions, and we are somewhat cautious as we await to see how the company addresses them.”

Those questions include how much debt will be transferred in the Speedway spinoff and what synergies will be lost as a result of the breakup, Gabelman said.

Marathon said Thursday it estimates the retail unit has a potential enterprise value of $15 billion to $18 billion for Speedway. The company will retain its direct-dealer business, with expected 2019 earnings before interest, taxes, depreciation and amortization of about $400 million, which is also included in the retail segment as currently reported.

Marathon, which has refineries from Louisiana to Alaska, has lost roughly 20% of its value after closing the $22 billion deal for Andeavor last year.

As of last week, Marathon was in active discussions with possible buyers for its 68,000-barrel-per-day Kenai oil refinery near Anchorage and its 58,500-barrel Salt Lake City plant, according to people familiar with the matter. The Kenai plant was among “several logical non-core” assets flagged for sale by Elliott in a presentation published last month.

The separation of Speedway will not require a shareholder vote, but will be subject to final approval by the board and other customary conditions. Marathon said it will initiate a nationwide search for a Speedway CEO from both internal and external sources.