LyondellBasell to Acquire $2B Stake in Sasol Unit 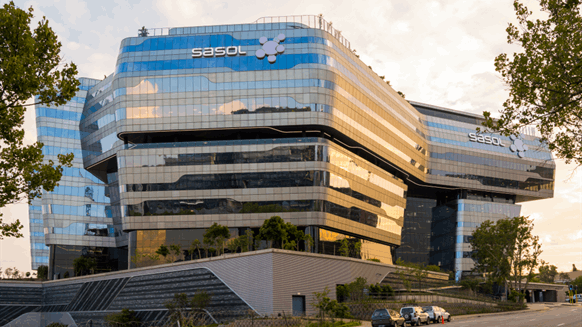 The deal is subject to a vote by shareholders.

(Bloomberg) -- Sasol Ltd., the South African chemicals and fuel manufacturer, agreed to sell a $2 billion stake in its U.S. base-chemicals business to LyondellBasell Industries NV to help pay down debt.

The unit will become a joint venture between the Johannesburg-based company and the U.S. chemicals giant, Sasol said in a statement Friday. The deal is subject to a vote by shareholders and is expected to be completed this year.

Sasol has been looking to reduce borrowings after a series of cost overruns and delays at its Lake Charles chemicals project in Louisiana were exacerbated by a historic rout in the oil market. The deal will cut debt to about $8 billion from $10 billion, the company said, building on the disposal of other assets such as last month’s sale of an air-separation unit to Air Liquide SA for 8.5 billion rand ($509 million).

Sasol shares gained after the announcement, but pulled back as oil prices dropped in the wake of U.S. President Donald Trump’s positive Covid-19 test. Sasol was 3.9% lower as of 11:16 a.m. in Johannesburg, compared with a 0.5% drop in South Africa’s benchmark stock index.

“This sale was widely anticipated and the $2 billion price is broadly in-line with our assessment of market expectations,” Morgan Stanley analysts led by Christopher Nicholson said in a note to clients.

While the Lake Charles stake has been the market’s main focus in Sasol’s asset sales, a process to sell its 50% share in a natural gas pipeline that runs from Mozambique to South Africa is still underway.

Alongside the asset-sale plan, Sasol is considering a rights offer of as much as $2 billion before the end of June even after saying the move is a last resort. “This, if implemented, would allow Sasol to operate sustainably within its covenant thresholds,” the company said, adding that the timing and amount to be raised would be dictated by the market.

Lake Charles was approved in 2014 at an estimated cost of $8.1 billion, but has exceeded the company’s worst-case scenario and is now expected to cost $13 billion. The debacle cost former co-Chief Executive Officers Bongani Nqwababa and Stephen Cornell their jobs after an investigation found serious mismanagement in the development of the plant. They were replaced late last year by Fleetwood Grobler.

The new joint venture will focus on base-chemical production including ethylene and polyethylene, the group said. For LyondellBasell, the deal is expected to add to cash flow and earnings within one year “with significant upside as market conditions continue to improve,” CEO Bob Patel said in a separate statement

--With assistance from Jacqueline Mackenzie, Lisa Pham and John Bowker.