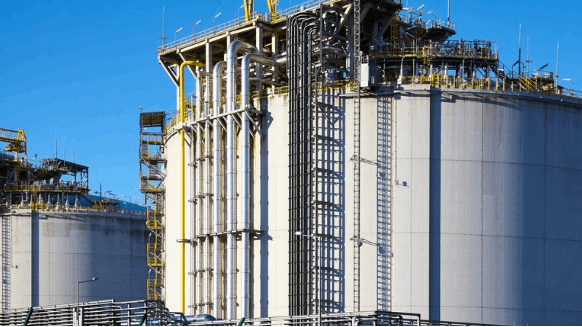 The Al-Zour plant will allow Kuwait to receive 22 million tons of LNG a year.

(Bloomberg) -- Kuwait aims to open what will be the Middle East’s largest import terminal for liquefied natural gas in March, according to two people familiar with the project.

The Al-Zour plant will allow Kuwait to receive 22 million tons of LNG (about 31 billion cubic meters) a year, almost doubling the region’s capacity.

The LNG market is expected to grow quickly in the next few decades as countries shift from oil and coal to cleaner energy. The global trade in LNG will probably increase to more than 1,000 bcm annually by 2035 from roughly 425 bcm today, according to BP Plc.

Kuwait is one of the world’s biggest oil exporters, shipping almost 2 million barrels a day, but pumps relatively little gas. The OPEC member produced 18.4 bcm of gas in 2019 and consumed 23.5 bcm, BP said in a report. It was the Middle East’s biggest importer last year and the 14th globally, according to data compiled by Bloomberg.

The Arab nation will use less than one-third of Al-Zour’s capacity until at least 2030, Bloomberg NEF calculates.

The government is yet to decide whether it will keep a vessel currently used to receive LNG -- a floating storage and re-gasification unit called Golar Igloo with a capacity of 5.8 million tons per a year -- after the new terminal starts, said one of the people, who asked not to be named as they’re not authorized to speak to media.

Kuwait Integrated Petroleum Industries Co., a unit of state energy firm Kuwait Petroleum Corp., is responsible for selecting a company to operate and maintain Al-Zour for five years, and may make a decision in the coming weeks, said one of the people. Greek gas-grid operator Desfa SA is the only company to have submitted an offer, the person said.