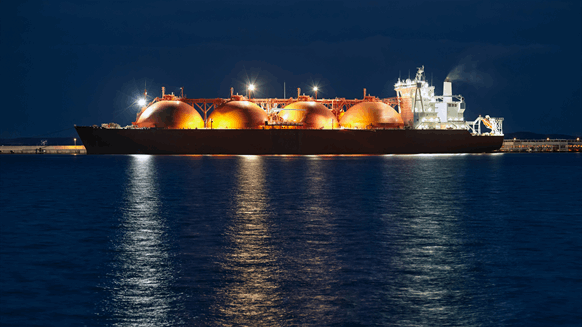 LNG traders anticipate a swift demand recovery in 2021 after a year in which the coronavirus pandemic prompted dramatic price swings.

(Bloomberg) -- Liquefied natural gas traders anticipate a swift demand recovery in 2021 after a year in which the coronavirus pandemic prompted dramatic price swings.

Colder weather in key importing nations, outages at major production hubs and congestion along global shipping routes already have combined to push spot prices in Asia to the highest level since 2014. That’s a more than sixfold jump from a record low in April, making Asian LNG the best performer among major commodities in 2020.

Demand for the fuel used in heating and power generation is growing faster than for any other fossil fuel as nations look for a cheap, reliable and cleaner alternative to coal. The pandemic derailed that growth for 2020, but China and India are emerging as major sources of demand.

“A lot of countries are looking to import LNG,” Tom Holmberg, a partner at law firm Baker Botts LLP in Washington D.C., said by phone. “I still think we are going to see growth in the LNG market.”

Below are the key areas likely to shape the market in 2021:

Global LNG imports in 2020 were roughly equal to the previous year, according to ship-tracking data compiled by Bloomberg. That was a big disappointment for an industry that has enjoyed 10% annual growth rate since 2016.

However, global gas demand is expected to resume growth next year. LNG demand, which makes up roughly 10% of the total, may rebound even faster, depending on how Pakistan, India and Bangladesh perform, said Manas Satapathy, a managing director in Accenture’s Energy business.

Shipments of the fuel into Asia have mostly recovered since the height of the pandemic, and the region’s LNG demand will rebound sharply next year, according to S&P Global Platts.

On the last day of 2020, spot Asian LNG price - the Japan-Korea Marker benchmark - rallied above $15 per million British thermal units for the first time since April 2014.

“It has been interesting to see how quickly Asian demand seems to have ramped up,” Holmberg said.

The picture in Europe is very different as countries grapple with a new surge of infections and lockdowns that sap energy demand. The continent is headed for a “very neutral recovery” in 2021, according to Satapathy.

Europe mainly relies on storage and pipeline gas shipments, which may be boosted with flows from a new link from Azerbaijan and the controversial Nord Stream 2 project that’s nearing completion.

Unplanned maintenance at LNG export facilities from Australia to Qatar to Malaysia has led to a tighter than expected market in the second half of the year. And delays in navigating the Panama Canal curbed supplies to Asia. If these disruptions persist well into the year, then prices could remain elevated well above current levels.

The Gas Exporting Countries Forum, which represents 60% of global LNG exports, expects supply to climb by 6% to 7% next year, up from 2% to 2.5% in 2020. LNG trade was much more resilient to this year’s challenges than imports in the fuel’s gaseous form, the group said in its short-term outlook.

The market will likely remain oversupplied next year, according to Vitol SA and Trafigura Group Ltd., two of the biggest trading houses active in LNG. Beyond that they expect the market to tighten.

Traders will be watching to see if buyers of U.S. LNG scrap any cargoes next year. About 200 cargoes were canceled in the summer after the pandemic hit spot prices in Europe and Asia. While there’s unlikely to be a repeat of that in 2021, traders do expect some cancellations to help balance the market.

American gas exports are rising to fresh records every month as new facilities come online. But any dip in demand could force suppliers to shut-in cargoes. The nation has become a swing supplier because its contracts allow for scrapping deliveries, which enables exports to quickly respond to volatile markets.

Trade relations between the U.S. and China will be a key focus. China is the fastest-growing LNG importer, and the U.S. is ramping up exports. There’s few long-term supply deals between the two nations even though LNG was a focus of President Donald Trump.

Joe Biden takes over as president on Jan. 20. A number of proposed U.S. LNG projects are hoping for more normal relations to help them sign deals with Chinese buyers.

“This certainly affects the LNG markets, particularly the LNG coming from the U.S.,” Holmberg said.

Environmentalists are increasingly looking at natural gas as a major polluter. After years of focusing on coal and oil, they’re turning their attention to how to zero out emissions from all fossil fuels. That shift has suppliers, buyers and shippers thinking green initiatives to clean up activities linked to methane and greenhouse gas emissions.

Half of the carbon footprint in the life cycle of an LNG cargo comes from upstream, Fusco said. The LNG producer is pushing for more transparency on carbon emissions for the fuel.

“Our customers are going to want to be sure that they can validate and audit what we’re telling them our carbon signature is,” he said.

The world’s first supply contract that required a declaration of emissions was signed this year while so-called carbon-neutral cargoes started flowing to China and Japan as nations outline ambitious targets to effectively zero out emissions.