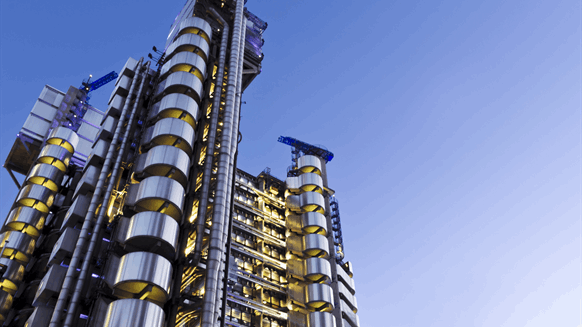 (Bloomberg) -- Lloyd’s of London, the world’s largest insurance market, said it’s joining efforts to support the pivot to a lower carbon economy and set out a timetable to phase out coverage for some of the most polluting industries.

Lloyd’s said Wednesday it will end investment in thermal coal-fired power plants, thermal coal mines, oil sands and new Arctic energy exploration activities. It also will ask the more than 50 so-called managing agents that oversee insurance syndicates at the more than 300-year-old marketplace to stop insuring or investing in the same areas by January 2030.

In addition, Lloyd’s Corporation, which oversees the insurance market, said it will allocate 5% of its central fund for impact investments by 2022, and will prepare to cut net emissions from its own operations to zero by 2025.

The announcement comes as a growing number of financial companies, from banks to private-equity firms, attempt to retool their businesses and portfolios for a future largely free of fossil fuels. Mobilizing financial markets to support the transition to a lower-carbon world was among the key goals of the 2015 Paris climate accord, which saw governments pledge to limit global warming to no more than 1.5 degrees Celsius above preindustrial levels.

“For the first time we are setting targets for responsible underwriting and investment to help accelerate society’s transition from fossil-fuel dependency, towards renewable energy sources,” said Bruce Carnegie-Brown, Lloyd’s chairman.

Ahead of the COP26 United Nations climate change conference to be held next year in Glasgow, Lloyd’s will consider how else the insurance sector “can best support the global effort to address climate risk” and the U.K. government’s plan for a green industrial revolution, it said in the statement.