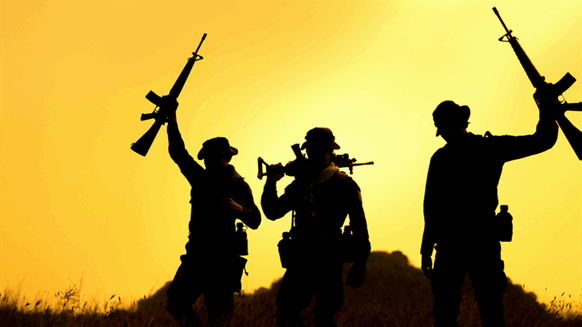 Tribes in eastern Libya backed the resumption of oil production from their region.

(Bloomberg) -- Tribes in eastern Libya backed the resumption of oil production from their region, shortly after the state energy company said negotiations between the U.S. and regional governments could lead to a restart of exports from the war-battered OPEC member.

The tribes, which helped shutdown most energy facilities in the east in January, will back rebel commander Khalifa Haftar’s Libyan National Army in negotiations with the United Nations over the distribution of oil revenue, Ibrahim Bouhreba al-Baraassi, a member of one of the groups, told Bloomberg on Monday.

The announcement came after the state-run National Oil Corp. said it was in talks with Libya’s UN-recognized government in Tripoli, the U.S. and some Middle Eastern powers. The NOC and Washington have called on supporters of Haftar, who’s backed in Libya’s civil war by Egypt, Russia and the United Arab Emirates, to end their blockade of the nation’s oil ports and fields.

“We are hopeful that those regional countries will lift the blockade and allow us to resume our work for the benefit of all the Libyan people,” the NOC said, without identifying the nations. An agreement should “protect the oil facilities and make sure they are never used as a military target or a political bargaining chip again.”

Libya’s exports have plummeted to less than 100,000 barrels a day from 1.1 million because of the shut downs. The NOC has said that neglect and damage from the conflict, which began in 2011 after the ouster of former leader Moammar Qaddafi, means it will cost hundreds of millions of dollars to restore output fully.

Haftar, who’s based in the east, launched a western offensive and was close to taking the capital, Tripoli, earlier this year, which would have effectively given him control of the country. Turkey intervened on behalf of the Tripoli government of Fayez al-Sarraj and pushed Haftar’s forces back toward Sirte. The two sides are poised to square off in the central city close to Libya’s “oil crescent” -- where some of its largest fields and export terminals lie.

The NOC said last week that Russian and other mercenaries had entered the western oil field of Sharara, the nation’s biggest, to prevent production from restarting.

“Many oil-producing countries are benefiting from the ongoing oil blockade and are taking advantage of the absence of the Libyan oil from global markets,” Mustafa Sanalla, the NOC’s chairman, said on Monday following a meeting with the European Union’s ambassador to the country.

--With assistance from Michael Gunn and Amanda Jordan.

To contact the editors responsible for this story:
Paul Wallace at pwallace25@bloomberg.net
Christopher Sell