Libya Gets Back on the Oil Map 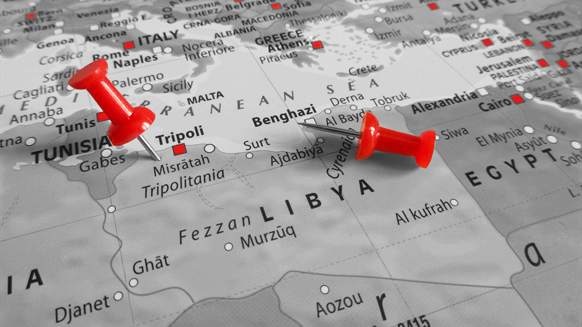 On Monday, Libya's first unified government in seven years was sworn in.

(Bloomberg) -- Libya’s back in the oil game after years of false starts and setbacks. Energy facilities shut or damaged during its civil war were reopened last year and the OPEC member has managed to keep its production above 1 million barrels a day since November.

On Monday, the country’s first unified government in seven years was sworn in, as efforts to reach a formal peace gather pace.

There are still plenty of divisions between the differing factions and those won’t be easily resolved before elections scheduled for December. The new cabinet will also have its work cut out restoring key services following a decade of turmoil since former dictator Muammar al-Qaddafi was toppled.

Yet the unity government, which ends a split between dueling eastern and western administrations, offers hope. It could further steady the oil industry in Libya -- home to Africa’s largest reserves -- and reduce the chances that militias restart fighting or close down ports, fields and refineries again.

“Libya’s oil and gas production will likely remain stable and the odds of broad conflict will remain low,” said analysts at Texas-based Stratfor, which advises clients on geopolitical risks.

How much more oil can Libya pump?

Output has surged from barely anything after warring sides reached a truce in mid-2020 and halted fighting. Libya is now pumping over 1.3 million barrels a day, more than several of its peers in the Organization of Petroleum Exporting Countries.

The National Oil Corp., the state energy company, aims is to raise daily production to 1.45 million barrels by the end of 2021, to 1.6 million within two years and to 2.1 million within four years, chairman Mustafa Sanalla told Bloomberg TV last week. The NOC plans to start new oil fields in the coming months in the basins of Sirte, in the central part of the country, and Ghadmis in the west, he said. It’s also working to restart fields shut down by Islamic State attacks in 2015.

Sanalla said those ambitious goals will depend on peace holding and the NOC getting a big enough budget from the government to repair energy infrastructure. The war and a lack of maintenance have left pipelines corroding and storage tanks collapsing.

A stable government should at least enable the cash-strapped NOC to address its most urgent needs. But it is leaning on foreign energy companies for financing. Total SE, Eni SpA and Repsol SA are among those with stakes in the country, though many of them pared back operations during the fighting.

What will the new oil minister do?

The transitional government has appointed an oil and gas minister, a position which hasn’t been held for years -- effectively leaving it in the hands of Sanalla. Libya’s former representative to OPEC, Mohamed Aoun, will head the portfolio. It’s still unclear what that will mean for Sanalla and for the NOC’s targets.

Under Sanalla, who took the helm in 2014, the NOC has been one of the few institutions able to work across Libya’s political divides. It’s managed to retain control of oil exports, despite fighters attempting to take over fields, pipelines and ports in their territories. Sanalla said the NOC is ready to work with the new government and will remain politically neutral.

The speed of Libya’s recovery took markets by surprise and weighed on prices. It also caused concern within OPEC, which is trying to restrict supplies and bolster prices following their rout last year as the coronavirus spread.

Libya is exempt from the supply cuts due to its conflict. While no OPEC member is publicly calling for the nation to be given a quota, that’s becomes likelier the more crude it pumps.

In Libya’s favor, however, is oil’s surge this year -- it’s up about 32% to $68 a barrel. With prices now above the level some major OPEC members such as Saudi Arabia and the United Arab Emirates need to balance their current accounts, there’s less pressure on others to rein in production.