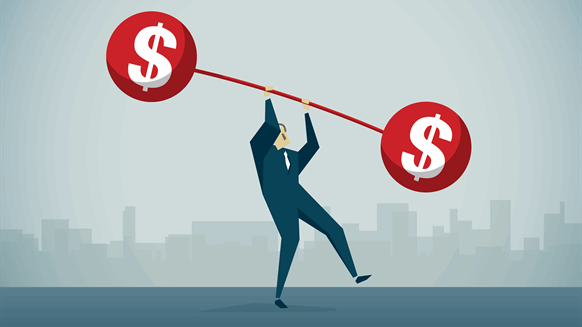 The crisis unfolding around the Iraqi city of Kirkuk has left some of the world's largest commodity trading houses worried.

(Bloomberg) -- The crisis unfolding around the Iraqi city of Kirkuk has left some of the world’s largest commodity trading houses worried the country’s autonomous Kurdish region will struggle to repay billions of dollars in cash-for-oil loans.

The approximately $3.5 billion in debts were going to be met with the roughly 500,000 to 600,000 barrels a day of crude that the northern region of Iraq was pumping, according to people familiar with the information, asking not to be named discussing private information. But output has now collapsed to about half that level after the federal government in Baghdad recaptured some oilfields that the Kurds seized in 2014.

"It looks a bit uncertain whether production is going to carry on in the very short-term," Ian Taylor, the chief executive of Vitol Group, the world’s largest independent oil trader, said in an television interview with Bloomberg. "The greater risk for the market is that we’re not going to see 500,000 barrels a day of oil, and we may see a lot less.”

Shipments through the Kurds’ export pipeline to Turkey were running at just 225,000 barrels a day on Wednesday. The trading arm of Russian oil company Rosneft PJSC plus independent traders Glencore Plc, Vitol, Trafigura Group and Petraco have made pre-export payment loans to the regional government of Kurdistan.

As the industry gathered at the annual Oil & Money conference in London this week, the people said that there were big questions about the capacity of Kurdistan to repay the loans after losing output from the fields near the disputed city of Kirkuk. However, they said that both Kurdistan and Baghdad were mutually dependent on oil exports and a deal could be reached in the next few weeks to boost output again.

“The KRG has signed prepayment deals with various traders including Rosneft, Trafigura, Vitol and Glencore, using oil flows to repay loans from these companies that it has used to keep its economy afloat," Richard Mallinson, geopolitical analyst at consultant Energy Aspects Ltd. in London, said in a note to clients. "If Baghdad takes control of most or all of the export volumes, the KRG will be unable to meet any ongoing commitments under existing prepayment deals or enter into new ones.”

The turmoil could extend beyond the traders as they turned to banks and other investors to share the risk. Glencore, for example, raised about $500 million through a 5-year note that paid a 12 percent coupon to underpin its loan to the Kurdistan government, according to people familiar with the matter.

The bonds of the special-purpose vehicle which raised $500 million to help fund Glencore’s prepayments for Kurdish oil have fallen to a record low this week. They have dropped 3.5 percent this week to 99.3 cents on the dollar, taking their losses since the Kurdish independence referendum to 6.7 percent.

The high coupon indicates the large margins the traders enjoyed lending money to Kurdistan in exchange for future oil shipments. Until now, the traders said that Kurdistan was roughly up-to-date repaying all the loans.

"We are monitoring the situation," Glencore Chief Executive Officer Ivan Glasenberg told reporters in Verona on Thursday. There has been no problem yet with any possible delays in payments.

The crisis started last month after the Kurdistan government held an independence referendum in the face of criticism from the U.S.,Turkey and Iran as well as the central government in Baghdad.

This week, Baghdad sent troops to recapture Kirkuk and the oilfields around the city, a move made possible by the routing of Islamic State forces in the northern Iraq. Kurdistan had controlled the areas since 2014 when the region’s well-armed and battle-hardened militia, known as the Peshmerga, won a battle against the Islamist group.

The reduced supply has boosted oil prices, helping the global Brent benchmark to close above $58 a barrel for the first time in three weeks on Wednesday. It traded at $58.12 at 7:52 a.m. London time on Thursday.

It may be the drop in flows is short lived. Iraq’s Oil Ministry deployed engineering teams at the Avana and Bai Hassan fields after workers and guards stayed away from the fields earlier this week, an official at the local North Oil Co. said.

Andy Bunting  |  October 20, 2017
The casino mockery of futures trading in all it's dirty dealings. Caught with all their pants right down.