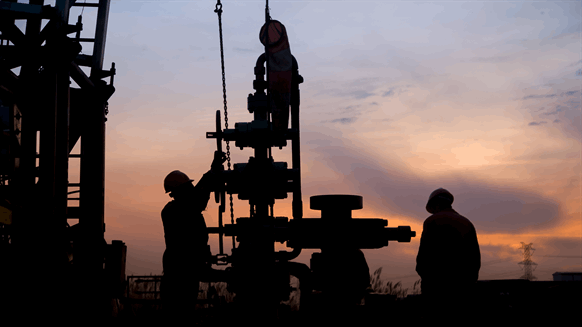 The U.S. airstrike that killed a powerful Iranian general and heightened tensions in the oil-rich region could boost the fortunes of troubled North American energy companies.

(Bloomberg) -- The U.S. airstrike that killed a powerful Iranian general and heightened tensions in the oil-rich region could boost the fortunes of troubled North American energy companies.

If the rally in oil prices persists, or if Middle Eastern supplies are cut off, deeply indebted producers like Whiting Petroleum Corp. and California Resources Corp. could lock in hedges above $60 a barrel, according to Spencer Cutter of Bloomberg Intelligence. That’s a potential cash-flow boost that they didn’t have two weeks ago, he said.

Notes issued by some of the weakest energy companies led the biggest gainers in high-yield bond indexes on Friday after reports that Iranian General Qassem Soleimani was killed in a drone attack authorized by President Donald Trump. West Texas Intermediate oil reached its highest level since September at about $62 a barrel

“That doesn’t mean that any of these companies that were distressed are going to be suddenly rolling in cash,” Cutter said in an interview. “But it does give them a bit of a lifeline.”

Representatives for Whiting and California Resources didn’t immediately respond to requests for comment. Whiting’s unsecured 2023 notes rose 2.75 cents to 87.5 cents on the dollar, their best level since August, and second-priority notes due 2022 issued by California Resources soared above 50 cents for the first time since September.

Energy companies are the largest cohort of the U.S. distressed-debt universe, according to Bloomberg Intelligence, and they were the biggest source of defaults in 2019, S&P Global Ratings reported. Companies in that sector went bankrupt in 2019 at the fastest pace since the 2015-2016 slump that claimed more than 200 producers and servicers.

The sector never showed a meaningful recovery as record oil production kept prices muted, so any sign of reduced output from the Middle East could benefit U.S. producers and the balance sheets of the weakest companies. Even companies that already went bankrupt could be helped if rising prices boost assets and cash flow projections, giving creditors a bigger pie to divide up.

Oil producers are evaluating their capital spending budgets for the year, and increased cash flows in 2020 from higher oil hedges could tempt them to boost production, Cutter said.

Investors have pressured oil companies in recent years to spend within their means, and the most troubled companies haven’t been able to increase production. But drilling more wells isn’t necessarily good for distressed-energy bondholders, Cutter said.

“If you’re a bondholder, you see this as a nice little windfall and you can get more mileage from a credit perspective by paying down debt,” he said. It’s also not good for distressed companies focused on natural gas because more oil production means more natural gas flooding an already saturated market.

More energy companies may also look to follow Chesapeake Energy Corp.’s refinancing deal that allowed it to stave off immediate bankruptcy. Higher oil prices are unlikely to spur new issuance for capital spending or acquisitions, but companies may be able to persuade investors to give them more time to pay off their debts, Cutter said.

It’s too early to say whether Friday’s oil rally will last. Iran has vowed “severe retaliation” for Soleimani’s death.

“We’ll see where this goes,” Cutter said. “I don’t think this changes the fundamental view from companies and investors.”

To contact the editors responsible for this story:
Rick Green at rgreen18@bloomberg.net
Claire Boston