How Venezuela's Last Oil Buyers May React to Sanctions 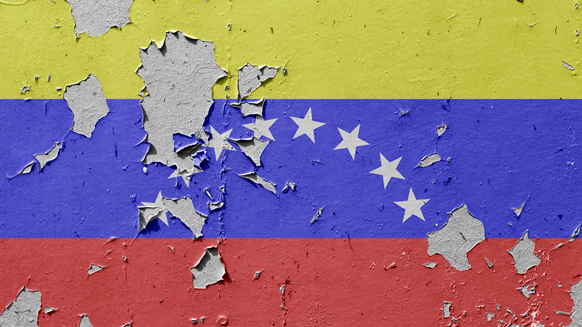 After the US slapped sanctions on PDVSA, the market has focused on how the remaining buyers of the South American country's heavy, low-quality crude will react.

(Bloomberg) -- After the U.S. slapped sanctions on Venezuela’s state-owned PDVSA, which essentially add up to an oil ban, the market has focused on how the remaining buyers of the South American country’s heavy, low-quality crude will react.

India is the third-biggest buyer of Venezuelan oil, after the U.S. and China, averaging about 340,000 barrels a day last year, according to data compiled by Bloomberg. The nation’s private refiners -- Reliance Industries Ltd. and Nayara Energy Ltd. (formerly Essar Oil Ltd.) -- are the primary buyers. That’s because their advanced refining systems can process the thick Venezuelan grade into high-value fuels such as low-sulfur gasoline and jet fuel. In contrast, state-owned refiners generally won’t benefit from more Venezuelan crude as their facilities can’t handle the low quality.

The U.S. sanctions may provide Nayara Energy with an opportunity to get extra Venezuelan crude as more of it becomes available in the market, which will help make up for supply it lost as the South American nation’s exports slumped, according to a person familiar with the company’s thinking.

India’s purchases from Venezuela fell about 11 percent last year, in line with an overall slump in exports, according to data compiled by Bloomberg.

The company as of Tuesday was yet to receive offers for more oil from Venezuela and it was still trying to understand the impact of the sanctions on shipping and payment mechanisms, said the person, who asked not to be identified discussing internal issues. Overall, it’s too early to determine how much more Venezuelan oil may come to India, the person said.

Nayara bought about 70,000 barrels a day of Venezuela’s oil in 2018, according to tanker tracking data compiled by Bloomberg.

At 1.36 million barrels a day of capacity, Reliance Industries is the biggest private refiner in India. It’s also the country’s top buyer of Venezuelan crude, at about 270,000 barrels a day, or roughly 80 percent of the total, according to data compiled by Bloomberg.

“Both Reliance and Nayara have a big appetite for Venezuelan crudes given their heavy crude slate.” said Senthil Kumar, an analyst at energy consultant FGE. “They cut imports recently due to declining production in Venezuela and Mexico. This is good opportunity to take some volumes that are redirected from U.S., but upside is limited.”

Shifting to the state-owned refiners, Indian Oil Corp. is the nation’s biggest at 1.6 million barrels a day of capacity. But that doesn’t mean it and others will be able to make room for more Venezuelan oil, according to a person familiar with the company’s position. That’s because the oil will need to be blended with lighter crude to run in most units owned by government refiners, said the person, who asked not to be identified, citing company policy.

The sanctions could also divert some of Indian Oil’s traditional supplies into the U.S. to fill the shortfall from Venezuela, leaving the company in a position to pay higher costs to compete for feedstock, said the person.

"Greater availability of Venezuelan oil doesn’t necessarily mean supply reliability,” said R. Ramachandran, refineries director at the state run company known as BPCL. “There are other issues such quality of the crude and higher freight. All these put together, Venezuelan oil isn’t very attractive to India, especially the state refiners.”