Hoard of North Sea Oil Is Starting to Diminish 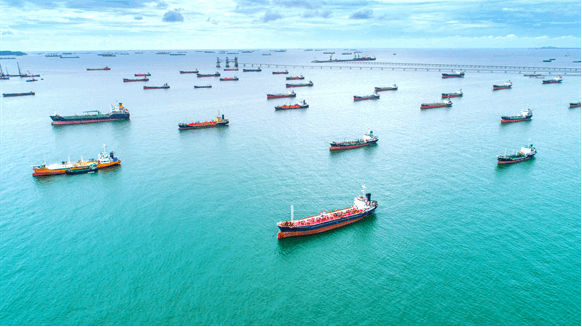 A glut of benchmark North Sea oil that's been sitting on tankers for weeks is starting to diminish.

(Bloomberg) -- A glut of benchmark North Sea oil that’s been sitting on ocean-going tankers for weeks is starting to diminish.

Millions of barrels of the region’s unwanted crude have been stashed on oil tankers since the coronavirus caused a demand collapse. But now the volumes are starting to shrink sharply, data compiled by Bloomberg show. Anchored on vessels everywhere from the U.K., to France and the Netherlands, the floating hoard reached 12 million barrels at the end of May. That figure has now dropped by 35%.

The decline in the region’s floating storage is important because the grades in question help shape the Dated Brent benchmark that’s used to settle millions of barrels of physical oil transactions between producers and refineries. Nations including Saudi Arabia and Russia are leading a global push to limit output and have cut deliveries into northwest Europe. That’s lifted oil prices and eliminated what traders call a super-contango, a pricing structure that had made it highly lucrative to store.

“The incentives to build floating storage have greatly diminished,” said Harry Tchillinguirian, oil strategist at BNP Paribas SA. “The holders of the storage are probably keeping an eye out for opportunistic sales where we see pockets of demand recovery.”

While a diminishing floating stockpile of benchmark grades offers producers cause to be optimistic that their cuts are effective, there’s still a lot of work to be done to eliminate a surplus in the global market.

There were also 180 million barrels of crude stored at sea worldwide last week, according to data from Vortexa Ltd., a data analytics firm. That’s the highest since at least 2016.

On-land stockpiles in Europe’s key storage hub of Amsterdam, Rotterdam and Antwerp, known as ARA, jumped to their highest level in two years last week, according to Genscape Inc. That includes non-benchmark grades from all over the world.

Shipments tracked by Bloomberg show that deliveries into ARA from the region’s main supplier regions dropped to 1.28 million barrels a day so far this month, down by about 360,000 barrels a day compared with the average between March and May.

While supplies from producers in the North Sea and the Mediterranean jumped so far in June, those from Russia fell sharply, tracking a similar drop in export programs. Just a sliver have reached northwest Europe so far this month from the Persian Gulf.

As the floating hoard of North Sea barrels has started to clear, the price of physical crude in the region has jumped. Brent, one of the five grades that makes up the Dated Brent benchmark, changed hands at its strongest level in three months earlier this week.

Asian refiners are ramping up their processing too, potentially draining the North Sea oil further. Three of the floating cargoes are at ship-to-ship transfer sites in the U.K. and Denmark, where they would normally load onto a larger ship to sail to Asia, while four others have already transferred onto supertankers.

“Floating storage is being released and being absorbed,” said Greg Newman, CEO of Onyx Commodities. “We’ve been in a steady upward trajectory and cargoes are starting to move to Asia too.”