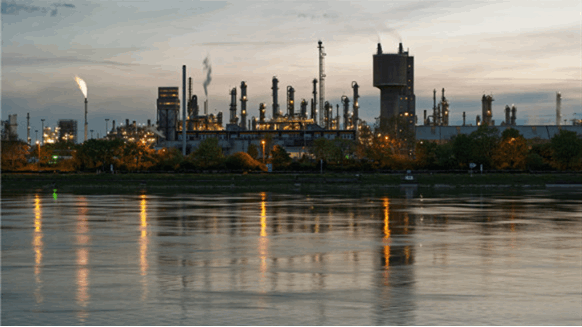 The battle against rising energy costs comes after global manufacturers were lulled by a protracted period of relatively low oil prices.

One common damper emerging from a spate of earnings reports on Friday is the 14 percent rise in Brent crude oil prices since the start of the year. This has fed into the cost of making basic supplies like cement from Swiss giant LafargeHolcim and BASF's chemicals and plastics -- which go into everything from cars to washing machines and shampoo bottles.

"The percentage rise in costs is maybe the steepest in recent years," LafargeHolcim Chief Executive Officer Jan Jenisch said on a call Friday. The producer is raising prices where it can to make up for the added energy costs. Profitability will suffer, and the company lowered its goal for 2018.

The battle against rising energy costs comes after global manufacturers were lulled by a protracted period of relatively low oil prices. It also adds to other challenges including pressure to find ways around a trade war between the U.S. and China. Closer to home for the Europeans, the U.K.'s split from the European Union could turn into a nightmare for companies moving goods across the Channel if negotiators don't reach a trade deal.

Shares of most of the companies fell Friday, contributing to a renewed selloff in European equity markets. Electrolux slumped as much as 14 percent, while BASF declined 2.1 percent. LafargeHolcim bucked the trend, rising 5.4 percent, after it said demand for cement is holding up.

The impact of higher raw-material costs was clearly visible Friday in BASF's earnings from basic chemicals and plastics, which have been a key profit driver in recent quarters. Chief Executive Officer Martin Brudermueller warned that he sees no short-term recovery in the business.

"When it comes to raw materials, we have price pressure so margins are under pressure," he said.

Where possible, BASF too pushed through price increases to customers. In other areas suffering inflation, Brudermueller showed he's even prepared to take more drastic action such as putting a unit making construction chemicals on the block. Two thirds of its raw materials expenses relate to hydrocarbons, and inflation there was 13 percent to 14 percent in the third quarter, the company said.

Further up the manufacturing chain, the Swedish maker of household goods, Electrolux, shook investor confidence on Friday after reporting a deep slump in sales in North America after customers there balked at paying the higher prices on its goods.

The company raised an estimate for this year and next on the hit it would take from costs of raw materials, tariffs and currency swings.

Automakers and suppliers also added raw materials costs to a long litany of woes that sent share prices tumbling across the sector this week. Daimler AG, Renault SA and Valeo SA all reported higher costs along with negative effects from a slowdown in China and new European tests for emissions.

--With assistance from Mara Bernath, Niclas Rolander and Andrew NoÃ«l.

To contact the reporter on this story: Tara Patel in Paris at tpatel2@bloomberg.net