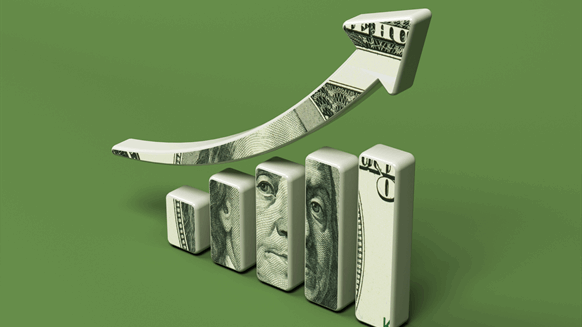 Halliburton Co. surpassed profit expectations amid a tight market for oilfield supplies as the world’s biggest provider of frack services gears up for increasing activity around the world.

The company reported adjusted per-share profit of 60 cents in the three months through September, higher than the average estimate from analysts in a Bloomberg survey, and more than double the figure from a year earlier. The shares rose as much as 4.4% and traded about 1.1% higher at 11 a.m. in New York.

“Structural demand for more oil and gas supply will provide strong tailwinds for our business,” Chief Executive Officer Jeff Miller said in a statement announcing the results on Tuesday. “Looking forward, we see activity increasing around the world -- from the smallest to the largest countries and producers.”

The hired hands of the shale patch are reaping the rewards of a tight market for workers and equipment as oil explorers expand production. Miller has already warned that energy companies that don’t already have frack gear under lease will likely be out of luck until next year.

Halliburton boosted sales by more than a third to $5.4 billion, led by North America, which posted its best period of revenue in three years.

“In North America, I see continued revenue growth -- the inbounds for calendar slots are stronger than I have ever seen at this point in the year,” Miller said.

Larger rival SLB, which changed its name from Schlumberger on Monday, announced its best profit in seven years last week as the surge in service pricing and hike in activity spreads beyond the US and Canada into international markets. Baker Hughes Co., the No. 3 oilfield contractor, kicked off the sector’s earnings season on Oct. 19 by surpassing expectations. Fourth-quarter per-share profit will jump 50% on a sequential basis, Baker Hughes said.

In a complete reversal from just a few years ago, Halliburton is now spending 80% of its frack-fleet manufacturing effort in Duncan, Okla., on refurbishments and just 20% on new fabrication. It’s an example of how oilfield-service providers are controlling growth in equipment supplies to bolster the prices they can charge. Overall fracking costs are expected to climb 27% this year, according to Kimberlite International Oilfield Research.

Halliburton announced last month it completed the sale of its Russian business to a group of former employees based in the country. Baker Hughes is also working to complete the sale of its Russian oilfield-services business before the end of this year, while SLB has said its unique corporate structure allows it to continue working in Russia without violating sanctions.

Halliburton said its international business has expanded 21% from a year earlier, even after selling its Russian operations. The company expects the Middle East to drive drilling growth, led by Saudi Arabia with meaningful increases in the United Arab Emirates, Qatar, and Kuwait.

--With assistance from Raeedah Wahid.