Gazprom to Splurge on EU Gas Pipe as US Weighs Penalties 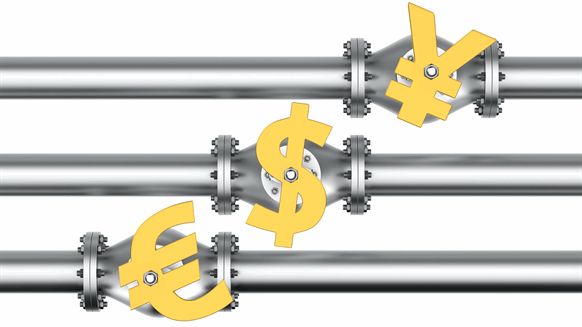 Russia's natural gas exporter is channeling more money into the fight for market share as the US threatens its biggest European pipeline project.

(Bloomberg) -- Russia’s natural gas exporter is channeling more money into the fight for market share as the U.S. threatens its biggest European pipeline project with possible sanctions and delivers tankers of fuel to the region.

Gazprom PJSC plans to spend 802 billion rubles ($13.7 billion) on routes to Europe and China in 2018, almost 41 percent more than this year, according to a draft budget prepared for a board meeting Tuesday that was seen by Bloomberg News. The biggest project is its Nord Stream 2 link to Germany, which had planned to start borrowing from banks next year before being singled out as a potential target by the U.S. in August.

Russia sees the threat of U.S. measures against Nord Stream 2 as an attempt to clear space for exports of liquefied natural gas in its most lucrative market. The expansion has divided opinion in the European Union, which has warned of retaliation if the U.S. hurts EU energy majors involved in the project, while the bloc also seeks to diversify energy supplies away from Russia. Poland and Ukraine, key transit routes for Russian gas, have lobbied against the 9.5 billion-euro ($11.2 billion) project that bypasses them by crossing the Baltic Sea.

Gazprom has little choice other than financing the future pipeline on its own for now, Alexander Kornilov, an energy analyst at Aton LLC, said. “It’s a very logical step.”

Gazprom and its five EU partners, including Germany’s Uniper SE and Austria’s OMV AG, stumped up 30 percent of the link’s budget by August. Their plan to have the project operator, fully owned by Gazprom, borrow the rest from banks may need to change given the U.S. law, OMV said in September.

Gazprom, which has a monopoly on pipeline exports of gas from Russia, will contribute an additional 1.52 billion euros for the under-sea section of the link next year as the company aims to keep the project on schedule to start gas flows in late 2019 and is ramping up spending on the Russian network, according to the document.

The initial funding terms are still in place, one of the partners, Uniper, said by email. OMV, Royal Dutch Shell Plc, France’s Engie SA and Wintershall, a unit of Germany’s BASF SE, either declined to comment or didn’t respond.

“Before getting all the approvals to build Nord Stream 2, it’s complicated to raise project financing,” Gazprom spokesman Sergei Kupriyanov said, without confirming any figures or commenting on the sanctions risk. “Really, this can be done after finishing the approvals process.”

Gazprom plans to supply 20 billion cubic meters of gas to Germany through the new link in 2020, cutting the company’s current transit through Soviet-era pipelines in Ukraine, according to the document.

Annual exports to Europe are forecast at about 188 billion cubic meters through 2020, close to the record high expected this year, according to the budget. Outlooks are based on Gazprom’s contract portfolio and current supply levels, Kupriyanov said.

Links to China and Turkey are also expected to start supplies by the end of 2019. Spending on the Turkish Stream pipeline will exceed 2.43 billion euros next year, up 72 percent from this year, the draft budget shows. The link is expected to pump almost 24 billion cubic meters in 2020, according to the document.

The Power of Siberia pipeline to China will need 218 billion rubles next year, a 4 percent increase, and is set to deliver 5 billion cubic meters in 2020.

While Gazprom sees investments slowing from 2020 after the key export pipelines are built, it plans to keep dividends flat at this year’s level of 190 billion rubles, the document shows. The company usually revises its budgets, which don’t include its oil arm Gazprom Neft PJSC or utilities in Russia and Europe-based gas traders, twice a year.